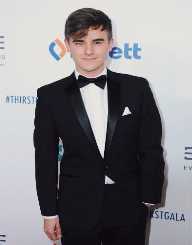 Born on September 12, 1992, Connor Franta an entrepreneur, writer, and Youtuber. Just like other youth of today, Franta has made his presence felt in on social media especially through YouTube. His YouTube channel Connor Franta has since its creation had over five million subscribers. Connor Franta who started as a member of the YouTube group Our Second Life under the Fullscreen Network is now operating independently under Big Frame network managed by Andrew Graham.

Connor Franta aside from being a social media star has ventured into writing with his first publication being the memoir, A Work in Progress on April 21, 2015. Entrepreneurial driven Connor Franta also has set up the brand Common Culture with its own clothing line, lifestyle, music creation and into coffees. He is also the co-founder of Heard Well which was launched in July 2015.

Connor Franta was born on September 12, 1992, in Wisconsin to Peter and Cheryl Franta. His father is a physician and his mother a homemaker. He has three other siblings, Dustin, Brandon, and Nicola. The family moved from Wisconsin to La Crescent, Minnesota shortly after Franta was born. Raised as a Catholic, Franta had his early education at the St. Peter’s Catholic School, Hokah, Minnesota until 8th grade. Young Connor Franta had issues with weight, which his mother dealt with by signing him in the YMCA swimming team. He continued his education at the La Crescent High School and graduated in 2011. While there, he got involved in sports and took part in cross-country ran.

After his graduation, Connor Franta enrolled at the Saint John’s University, Collegeville, Minnesota where he studied business as a freshman and through his second year added an art minor in films. He revealed his sexuality as gay in a six-minute video titled Coming Out on YouTube. In the video, he expressed how happy he has become after accepting the person he was. He went on to state how he gained help on the internet and expressed his willingness to extend such advice to people struggling with their sexuality. The video, which was posted on his Franta YouTube channel, has since had over 11 million views and 949 likes. Since November 2, 2016, was the second most watched video on Franta channel.

Connor Franta Frantauploaded his debut YouTube video in August 2010 after picking inspiration from vloggers like Shane Dawson and Mitchell Davis. He has since that time had over 355 million views and 5.59 million subscribers on his YouTube channel. This makes him the 158th most subscribed channel in the World. To extend his visibility and also explore other avenues on YouTube, he joined the channel Our2ndLife with other YouTubers like Kain Lawley, Trevor Moran, Justin "JC" Caylen, Sam Pottorff and Ricky Dillon in 2012. After spending two years in the group, he left for personal reasons in 2014. Franta appeared in the YouTube tribute video, YouTube Rewind, in 2014 and 2015 for the most popular video on YouTube.

Connor Franta aside popularity on YouTube and other social media is also entrepreneurial driven and has ventured into some businesses with his brand Common Culture. He released a compilation album Crown Vol. 1 of his favorite songs of up-and-coming musicians on November 11, 2014. The album made it to the Billboard 200. He has also released four others of such albums as at April 28, 2016.

Connor Franta setup the record label Heard Well, in 2015, with a partnership with his manager Andrew Graham and Jeremy Wineberg. The label aims at putting together albums featuring undiscovered artists. Under his Common, Culture brand is a franchise like a clothing line in coloration with Junk food clothing and the Common Culture Coffee with the LA Coffee Club.

Connor Franta has also ventured in writing and has since released the memoir, A Work in Progress, which he took almost a year to write. The book, which was released on April 21, 2015, focus on his entire life and other personal stories. The launch of the book was followed by a book tour in United State, the United Kingdom, and Australia. Some of the places toured in these countries included Minnesota, Houston, New York City, New Jersey, Los Angeles, London, Manchester, Liverpool, and Birmingham, Melbourne, Perth, and Brisbane. A Work in Progress sold 200,000 copies after spending 16 weeks on The New York Time Best Seller list.

He is also set to release his second book Note to Self on April 18, 2017, per his announcement in January 2017. According to him, the book features poetry, stories, essays and his photography. Some of the topics the book talks about are depression, clinical, social anxiety, self-love, and breakups.

Connor Franta launched The Thirst Project aimed at raising funds to build water wells for people in Swaziland during his 22nd birthday in 2014. His target was to raise $120,000 within a month and extend appreciation to donors by giving out T-shirts, posters, a through Skype and a video acknowledgment. However, his target was reached within ten days as fans helped raise $75,000 within 48 hours. As at the end of the month, he had raised $230,000. He also set another campaign on his 23rd and was able to raise $191,000 for same projects.

Connor Franta was awarded the Favourite YouTube Star at the 42nd People’s Choice Awards in January 2016. He has also gained nominations in Teen Choice Award and Streamy Award.