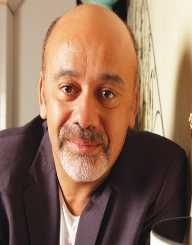 Christian Louboutin is a fashion designer with a unique sense of style and elegance. He commands a huge following of clients both locally and internationally for his trademarked red-soled foot where.

Christian Louboutin was born on the 7th day of January in the year 1964 and raised in Paris. He is the son of Roger, who was a cabinet-maker and Irene a homemaker. Louboutin was the only son in the family of four siblings. In his childhood, he felt like an outcast as he was much darker than all his siblings. His skin complexion cast lots of doubt on his origin. He thought that probably he had been adopted. Louboutin watered all this bad feeling by inventing stories based on the Egyptian characters as he had great admirations for the Pharaohs.

In 2014, his suspicion on his origin came to pass as one of his sisters accidentally revealed to him. Louboutin traced his roots back to Egypt, where his biological father is believed to have originated. His Mother had been involved in a secret affair.

He was not academically conscious. He was expelled in three schools. At last, he opted to run away from home. He lodged with a friend for a while, with her mother’s consent. His family opposed his move to drop out of academics. Louboutin had other ideas. His fascination was footwear. He gained the inspiration after a visit to a museum. At the museum, he saw a sign indicating that high heels were not permitted. This grew his fantasy for great shoes. He started growing his skills by drawing sketches of shoes in a notebook. Two years later Christian Louboutin started working for Charles Jourdan, a celebrated shoe designer then. Louboutin worked as freelancer designer for fashion houses before making the bold move of opening his own shoe company in the early 1990s.

Christian Louboutin had a relatively easy start in stabilizing his shoe business. He managed to embrace the elite market in Europe. He employed an offensive marketing charm to reach his intended market. After launching the women's Shoe Salon, Louboutin introduced the trademark signature that was the red sole in the year 1993.

The red sole signature is attributed to the red painting that Louboutin saw his assistant using on her nails. He was inspired by the red color and decided to use it for the soles as the season’s statement. His choice resonated well with his clientele. This was the beginning of Louboutin’s new dawn. Celebrities like Princess Caroline of Monaco and Madonna were his first clients. Madonna helped in marketing the Red souls to the world by wearing them in her videos.

Louboutin did not settle for the women’s shoe line. He was geared towards expanding his business. He incorporated women’s handbags in 2003. In 2011 he started a men’s shoe line. Louboutin also considered partnerships as his way of business growth. He partnered with other organizations that offered the adventure of creativity. Amongst the partnerships were edition pieces, gallery exhibitions, and custom bars. This brought about great expansion into men’s footwear, makeup, handbags, and fragrances. Apart from working for his company, he cooperated with director David Lynch in 2007 for a photo exhibition. Louboutin played a crucial role in helping to design elements of “Fire” in a show at the legendary Parisian Club.

Christian Louboutins story is one of the greatest inspirations in the world. He was able to turn his passion into a beautiful success story through the Red Soles shoe company. He began by selling 200 pairs of shoes as his initial sale. He followed this with a 700, 000 sales in 2012 pushing the annual growth rate to 40 percent. His company’s annual revenue graph has been steadily on the upward projector. Louboutin is believed to be selling above 500,000 pairs of shoes annually. The cost of a Louboutin’s pair of shoes ranges from USD 400 to USD 600. He has the Paris headquarters store and several other stores worldwide.

Life has gifted each individual differently. He followed in the line of other great fashionistas who left academics to explore their natural talents. Christian Louboutin was able to use his talented skills, and passion to make a signature that will be forever remembered and cherished by generations to come. The legendary Red Soles will continue leaving a statement for other upcoming designers to learn and benchmark on. He has contributed to the historical adage that Paris is the home of fashion.