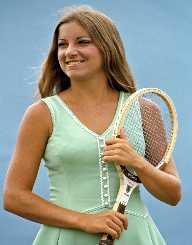 Chris Evert who is also known as Chrissie by some people is a former American professional tennis player. She was born in a family of tennis, and her family lifestyle pushed her into tennis game. She started taking lessons on tennis at a very tender age. She took alesson from her father who was then a professional tennis coach. Chris Evert was highly known to be a strong-willed and highly energetic tennis player. The Media later nicknamed her Ice Princess.

She told people the secret of her success in tennis. Chris Evert claimed that being calm and composed often helped understand and overcome the shortcomings of her opponents. Chris was later able to make her influence known by leaving a mark on the sport. This is most likely because she was part of the sport while it was gaining popular support from the people.

Her birthplace was Fort Lauderdale, Florida and was born on the 21st day of December 1954. She was given birth to Jimmy Evert and Colette Thompson. Her father was a professional tennis coach and taught Chris Evert what she learned in tennis. Chris took lessons from her father from age 5. In 1973, she graduated from St. Thomas Aquinas High School in Fort Lauderdale before attending the Auburn University where she got a full athletic scholarship for tennis. As a child, Chris Evert was able to become the No 1 player in the Under 14 age group through constant practice. She also won the Under 16 National Championship for tennis in 1970.

Defeating a reigning U.S. Open Champion, Margaret Court at a tournament in North California is a revelation of her talents. She also got revealed to the world of tennis after she staged several and impressive comebacks in the early rounds in 1971 US Open. However, Chris Evert lost to Billie Jean King in the semis. The fact that she could reach that feat in her first tournament was very remarkable. She later went on a winning streak in 1974 by having a reeled off record of 55 consecutive wins. A year later, Chris Evert added a second French title to her name as well as being the champion of the US Open. She held this spot till the end of the 1970s. Surprisingly, due to her fame, she got different names which include America’s Sweetheart. She was known for being able to throw her opponents off balance with different baseline groundstrokes.

Chris Evert later won the 1982 Australian Open title and continued her dominance in the Women’s Tennis. However, Martina Navratilova started threatening her influence over the women dominance and eventually defeated Chris in 1984 US Open Final. In 1985 and 1986, Chris outlasted her greatest rival. In 1989, she lost to Zine Garrison in the quarterfinals of the US Open. She retired following the loss. At the end of her career, she had 18 Grand Slams Single Titles, a record of seven French Open as well as three doubles championships. Chris Evert was however elected unanimously to the International Tennis Hall of Fame in 1995 being an owner of a record of 90 percent career winning percentages in singles play.

Chris Evert had a romantic relationship with a tennis player, Jimmy Connors in 1970s before they got engaged. However, their engagement was not fruitful as the marriage was called off. While the two were together, they often played doubles occasionally. She later married John Lloyd, a tennis player also, in 1979. However, the two divorced in 1987. It was noted that she had a romantic affair with Adam Faith, a British singer. She later married Andy Mill in 1988 and gave birth to three children. She divorced him too in 2006. After these numerous marriages, she found it deem to date an Australian golfer. She later married him in 2008, but the relationship was short-lived as they divorced in 2009.