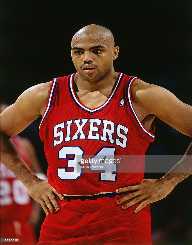 Retired American professional basketball player Charles Wade Barkley was born on February 20, 1963, in Leeds, Alabama, United States of America. He attended the Leeds High School and stood at 5 ft 10 in (1.78 m) and weighed 220 pounds (100 kg) as a junior and was named as a reserve on the school basketball team. However, during his senior year at the Leeds High School Barkley, he grew to a height of 6 ft 4 in (1.93 m) and earned a place in the starting lineup of the senior basketball team of the school.

Charles Barkley's average of 19.1 points and 17.9 rebounds per game led his team to a 26-3 record on their way to the state semifinals. In the state high school semifinal, he scored an astonishing 26 points against Alabama's top player, Bobby Lee Hurt. Sonny Smith, an assistant to the Head Coach of the Auburn University, watched the game and soon recruited Barkley for Auburn University. Thus, Barkley had the opportunity of doing a major in business management while playing for the University basketball team.

Charles Barkley spent three years playing the college basketball and earned several honours including Southeastern Conference Player of the Year in 1984 and was named All-SEC player three times. His name was included in the Auburn’s All-Century Team afterwards. His usual style of grabbing a defensive rebound, dribbling the ball all the way to the opposite end covering almost the entire length of the court and scoring with a two-handed dunk compiled with his burly frame, earned him the nickname "The Round Mound of Rebound." He held the Auburn record for career field goal percentage with 62.6%. Birmingham Post-Herald declared Barkley as the SEC Player of the Decade for the 1980s.

In 1984, Charles Barkley declared himself ready for the professional grind and Philadelphia 76ers picked him up as their power forward with the fifth overall selection in the 1984 NBA Draft. In his rookie year, Barkley averaged 14 points and 8.6 rebounds per game and was named to the NBA All-Rookie Team. In the postseason, his team advanced to the Eastern Conference Finals but was defeated by the Boston Celtics. He averaged 14.9 points and 11.1 rebounds per game as a rookie in the postseason.

During his second year, with substantial coaching and weight management under the leadership and tutelage of Moses Malone, Barkley improved his game and became the team’s leading rebounder and starting power forward. He was the number two scorer for his team in that season. However, despite all his efforts, Philadelphia was defeated 4–3 by the Milwaukee Bucks in the Eastern Conference Semifinals. He was selected for the All-NBA second team in his second year as a pro.

Among the tumultuous eight seasons that Charles Barkley spent with the Philadelphia 76ers, the second season was the most rewarding one, both for him and for his club. He was a difficult player to play with and not very receptive to coaching. Moreover, he earned a bad name due to his inconsistent play and temper tantrums. However, during the 1987-88 season, he was named to the All-NBA team for the first of four consecutive years.

Charles Barkley represented the 1992 USA Olympic Basketball Team and helped the team win the gold medal. He was officially traded to Phoenix Suns on July 17, 1992. He won the league's Most Valuable Player (MVP) during the 1992-93 season and his team to their first NBA Finals since 1976. However, in the championship round, Phoenix Suns was defeated by Michael Jordan and the Chicago Bulls in six games.

In the 1993-94 season, Charles Barkley encountered his worst injury problems in the form of severe back pain and almost bid farewell to the game as a result of the nagging injury. A torn right quadriceps prevented him from appearing in his eighth consecutive All-Star game. However, he was still included in the All-NBA second team. During the offseason, he pondered over retirement. However, he returned for his eleventh season in the following year, still fighting injuries. After having struggled during the first half of the season, he gradually improved his game and earned his ninth consecutive selection in the All-Star game.

Charles Barkley was traded to Houston after playing his last with the Phoenix Suns during the 1995-96 season. He played for the Suns for four seasons, and he was selected for the All-Star and All-NBA team consecutively on all four occasions. During his stint with Houston, he was named one of NBA’s 50 Greatest Players in a ceremony organized on the occasion of the league’s 50th anniversary. He was also instrumental in earning a gold medal for the American Basketball Team during the 1996 Atlanta Olympics.

Barkley retired from professional basketball in April 2000 playing his final game on April 19, 2000. His career statistics revealed that he was only one of the four NBA athletes to have achieved twenty thousand points, ten thousand rebounds, and four thousand assists, along with Karl Malone, Kareem Abdul-Jabbar, and Wilt Chamberlain after retirement.

Post-retirement, Charles Barkley continued to appear in commercials for a wide range of products. He is also a popular co-host of the NBA game show ‘Inside the NBA’ on the Turner Network Cable Channel and frequently appears as their talk show guest.

In 1989, Charles Barkley married Maureen Blumhardt. The couple was blessed with a daughter, Christiana, in the same year.

A lot of controversies surrounds Charles Barkley's 16-year-long career with NBA. He is considered as one of the most outspoken, dominating and controversial players in the history of American Basketball.

On March 3, 2001, Auburn University authorities retired the no. 34 jersey, Barkley wore during his university days in recognition of his exploits in NBA and also in the college.