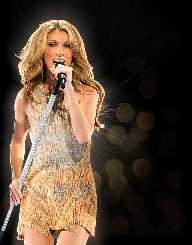 Celine Marie Claudette Dion was born in Charlemagne, Quebec, Canada on 30 March 1968. She is the youngest of 14 children in her family. Her mother was a homemaker, but her father - a butcher. She was raised as a Roman Catholic. Although her family was poor, she remembers her childhood to be very happy.

Music played a significant part of Dion family’s life. Her first public performance was at her brother’s wedding when she was only five years old. She and her siblings often performed at her parent’s small piano bar Le Vieux Baril. Since early childhood, Dion dreamed of being a singer.

When Celine Dion was 12 years old, she, her mother and her brother collaborated to write and compose her first song. The record was sent to music manager Rene Angelil, who was moved by her performance and decided to work with her.

In 1981, Angelil mortgaged his home to fund Dion’s first record, which made Dion a No.1 star in Quebec. In 1982, Dion performed in the Yamaha World Popular Song Festival in Tokyo and won the award for Top Performer and Best Song.

She participated and won several contests. More success came when Dion won the 1988 Eurovision Song Contest, representing Switzerland. After her initial success, Angelil realized that to be marketed worldwide; her image has to be changed.

Dion underwent dental surgery, improved her appearance and went to Ecole Berlitz to improve her English. During a concert on the 1989 Incognito Tour, Dion injured her voice. She was not allowed to utilize her cords for three weeks and later had to undergo vocal training.

After the Eurovision song contest, Celine Dion started to look for her stardom in the United States. In 1990, she recorded her first album, Unison that sold in more than 1 million copies worldwide. But her real-world recognition came, when she recorded the theme song to Disney’s animated film Beauty and the Beast. The song won a Grammy and Academy Award.

Soon after, Celine Dion recorded her new album The Color Of My Love, which was a top seller. The album featured love ballads, which she became known for. She also performed at the 1996 Olympic Games in Atlanta, Georgia. The same year her album Falling Into You won a Grammy Album of the year and best pop album.

Already famous, Dion was still rising in her career. In 1997, Dion sang the theme song My Heart Will Go On for blockbuster film Titanic. The hit sold more than 50 million copies worldwide.

Celine Dion was touring relentlessly to promote her albums. In 1998 she began an extensive 14-country tour, which finished on December 31, 1999. In early 2000 she announced that she is taking some time off her career to focus on her family.

She took time off and in 2002 returned to the stage with her hit A New Day Has Come. The following year, she began a 36-month engagement in Las Vegas, at the Caesars Palace. The same year she released the album One Hear, which did not do as well as her previous records. In 2003, she went back to recording French-language albums.

Although her albums did not do so well, in 2009, she was named the second highest earning musician, with $100 million making in a year.

In 1994, Celine Dion married her manager Angelil. He was married before and had three children. Angelil and his first wife separated in the 80s and at the time, he and Dion started a romantic relationship. Dion took time off in 2000, to focus on her family.

In 1999 Angelil was diagnosed with skin cancer. She and Angelil were trying to have a child, but with no success. She underwent in-vitro fertilization and in 2001 gave birth to her first son. In 2010, she used her previously stored eggs and gave birth to twin boys.

In 2014, Dion canceled her concerts to be together with her 72-year-old husband. His cancer had come back. The same year, Dion herself had health issues - her throat muscles were inflamed, which prevented her from performing. In January 2016, her husband died.