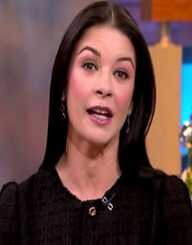 Catherine Zeta-Jones was born on September 25, 1969, in Swansea, Wales. Her father David Jones was a sweet factory owner, and her mother Patricia was a seamstress. Zeta-Jones has an older and a younger brother. She was raised in a suburb of Wales, Mumbles. As a child, she was very active, and her mother decided to send her to Hazel Johnson School of Dance when Zeta-Jones was only four years old.

She attended the Dumbarton House School in Swansea. The family had a modest income, but when they won a bingo competition with a £100 000 reward, they were able to pay for Catherine’s dance and ballet lessons.

During her time in school, Zeta-Jones participated in school plays. She gained her first media attention after winning a Junior Star Trail talent competition, for her rendition of a Shirley Bassey song. Zeta-Jones often traveled to London with her dance group and in the meantime also attended several auditions. When she was nine years old, Zeta-Jones was selected to play one of the orphan girls in the West End production of Annie.

When she was a teenager, Zeta-Jones became national tap-dancing champion. The most prominent role of her early years came in 1981 when she won the role of Annie in Swansea production of the musical. In 1983, Zeta-Jones played the role of Tallulah in the West End production Bugsy Malone.

When Catherine Zeta-Jones was 15 years old, she decided to drop out of school and pursue a career in acting. She moved to London and attended the Arts Educational School in Chiswick for a course in musical theatre. When Zeta-Jones was 17 years old, she became the second understudy to the lead actress in West End’s 42nd Street. Her performance impressed the producer, and Zeta-Jones became the lead actress in the production for the next two years.

Catherine Zeta-Jones made her screen debut in 1990, in the film 1001 Nights. The film was not a major success. Her next on-screen appearance was in the British comedy-drama television series The Darling Buds of May, in which she starred from 1991 until 1993. The role gave Zeta-Jones widespread public recognition since the show was at the time majorly popular.

In 1992, Zeta-Jones was featured in the adventure film Christopher Columbus: The Discovery and in George Lucas’ television series The Young Indiana Jones Chronicles. The following year, Zeta-Jones starred in Splitting Heirs.

Over the next two years, Catherine Zeta-Jones starred in several British films that were mostly not successful. She had established herself as the British “pretty girl” and wanted to make some changes. Zeta-Jones then decided to relocate to Los Angeles. Her first role in Hollywood was in the 1996 superhero film The Phantom. Although Zeta-Jones received good reviews, the film itself was not a success. She was then cast in the CBS miniseries Titanic.

Director Steven Spielberg noticed Catherine Zeta-Jones and he recommended her for the role in Martin Campbell’s The Mask Of Zorro. Zeta-Jones co-starred Anthony Hopkins and Antonio Banderas, and the film earned overall good reviews. The role became her breakthrough performance in Hollywood and won Zeta-Jones the MTV Movie Award for Best Breakthrough Performance.

Her next film role was in 1999 in the heist film Entrapment. Later that year she appeared in The Haunting and the High comedy Fidelity. In 2000, her most significant role was the action film Traffic. The film turned out to be a major box office success and earned Zeta-Jones critical acclaim and Golden Globe nomination.

After her success in Chicago, Zeta-Jones was cast in several other successful movies. One of her most acclaimed performances from this time was in the 2004 film The Terminal, co-starring Tom Hanks. She also starred in the box-office smash Ocean’s Twelve.

In 2005, Catherine Zeta-Jones starred in The Legend of Zorro, a sequel to The Mask of Zorro. However, the film was not so positively received by the critics. After this, she starred in several films, like the biopic Death Defying Acts and romantic comedy No Reservations. After this film, Zeta-Jones reduced her workload for the next five years to focus on her family and health.

Catherine Zeta-Jones took a three-year break from acting but came back to acting in 2012, starring in the comedy Lay the Favorite. Her next movie appearance was in the comic Rock of Agers, followed by Playing for Keeps. All three movies were box-office failures. In 2013, Zeta-Jones starred in the crime thriller Broken City, but her performance did not receive good reviews.

Her luck changed when Zeta-Jones once again collaborated with Steven Soderbergh for the thriller Side Effects. The film received critical acclaim. The same year she also starred in the action-comedy Red 2, and then took some time off from acting. Her latest performances have been in the 2016 film Dad’s Army and television drama series Feud.

During the 1990s, Catherine Zeta-Jones dated several British celebrities, like John Leslie, David Essex, and Mick Hucknall. She was engaged with the Scottish actor Angus Macfadyen. In 1998, Zeta-Jones met the actor Michael Douglas at the Deauville Film Festival in France. At the time, Douglas was still married, and they dated in secret. After Douglas got divorced, he and Zeta-Jones engaged at the end of 1999. They were married in 2000 in a high-profile ceremony in New York Plaza Hotel. The couple sold the wedding pictures for $1 million to OK! Magazine.

Douglas and Zeta-Jones have two children together. Until 2009, they lived in Bermuda and later moved to New York. In 2010, Douglas was diagnosed with tongue cancer, which triggered Zeta-Jones to fall in depression, and eventually was hospitalized for treatment. Following the stress of their health issues, Douglas and Zeta-Jones decided to live separately in 2013 but reconciled in 2014.