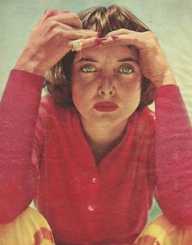 American actress Carolyn Jones was born on the 28 April 1930 in Amarillo, Texas. She had one sibling, a sister. When Jones was four years old, her parents separated.

After graduating from high school, she enrolled at the Pasadena Playhouse (1947-1950).

She worked as an understudy at the Players Ring Theater and after being talent scouted she was offered a screen test with Paramount. Her first film role was in The Turning Point (1952). Her contract was not renewed by Paramount and she worked on stage and in television before appearing in House of Wax (1953).

She won a Golden Globe Award and a Laurel Award for Marjorie Morningstar (1958). And was nominated for Golden Globe for her work in Burke’s Law (1963).

She met Aaron Spelling in the early 1950s when they were both struggling to break into the film industry in Hollywood. They married in April 1953 and divorced ten years later in 1963. She was married to Herbert Greene for seven years (1968-1977). In 1982, she was married a third time to Peter Bailey-Britton.