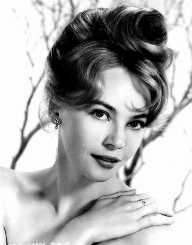 Leslie Caron is a French American actress and dancer who appeared in over 45 films. Her famous musical movies are An American in Paris (1951), Lili (1953), Daddy Longlegs (1955) and Gigi (1958). She also has worked in other nonmusicals like Fanny (1961), The L shaped room and Father Goose (1994). Two of the movies she acted in An American in Paris and Gigi have won the best movie academy awards. She is one of the few dancers who has worked with legends like Gene Kelly, Fred Astaire, and Rudolf Nureyev. She is fluent in French, English, and Italian.

Leslie Claire Margaret Caron was born on 1 Jul 1931 in Boulogne Sur Seine.  Her father Claude Caron was a chemist and pharmacist. Her mother Margaret was American born and had been a ballet dancer in the States. Her older brother Aimery Caron became a chemist like his father. Leslie was trained to be a performer from childhood by her mother. She was trained in the National Conservatory of Dance and was hired by the renowned Roland Petit for his company at the age of 16.

Gene Kelley was impressed by her performance in the ballet La Rencontre (1948). Later he cast Leslie Caron to play his partner in the musical An American in Paris in 1951. This led to an extended contract with MGM who went on to produce many films with her. Leslie’s gamine looks and a pixie-like appeal was ideal for Hollywood, and she became a great hit.

Leslie Caron was a good singer, dancer, and actress. She succeeded in both musicals and drama. They included the musical The glass slipper (1955) and the drama The man with a cloak (1951).

Leslie Caron acted in movies with Fred Astaire in Daddy Long Legs (1955), with Mel Ferrer in Lili (1953) and With Louis Jordan and Maurice Chevalier in Gigi (1958). She was nominated for an Academy Award for Best Actress for her role in Lili.

Leslie Caron continued to act and appeared in Chocolat in 2000. She has also appeared in episodes of soap opera Falcon Crest. Her performance in Law &Order: Special Victims Unit won her the Primetime Emmy Award in 2007. Caron also appeared in the ITV television series The Dussels. She is one of the few actresses of the musical era who continues to act. Leslie Caron had published her autobiography Thank Heaven in 2010 in English in US and UK and French in 2011.

Leslie Caron won the Emmy Award for her performance in 2007 for her role in Law & Order Special Victims Unit. On 8 Dec 2009 Caron received the 2,394th star in The Hollywood Walk of Fame. She received an honorary degree from The American University of Paris in 2009. She has also received various honors from the French government including the Chevalier de la Legion d’honneur.

Leslie Caron married George Hormel III, grandson of the founder of Hormel the meat packing company in 1951. They divorced in 1954. She then married Peter Hall, a British theatre director. They had two children Christopher and Jenifer. They divorced in 1965. Warren Beatty with whom she had an affair was named co-respondent. He was asked by the London Court to pay the costs of the case. In 1969 she married Michael Laughlin, but they divorced in 1980.

Leslie Caron owned and operated a hotel located in the South of Paris named Auberge La Lucarne aux Chouettes (The Owls nest) from Jun 1993 to Sep 2009.