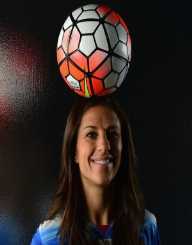 Carli Lloyd Hollins was born on July 16, 1982. She is an American professional football player. She is best known for her scores in the 2008 and 2012 Olympics, where she helped the USA team to win gold medals during World Cup.

Carli Anne Lloyd was born on July 16, 1982, in Delran, New Jersey. Her parents were Stephen and Pamela Lloyd, who gave birth to her siblings, Stephen and Ashley. At the age of five, she started playing football mainly because she was hanging with the boys as her mother stated. Carli made great efforts to perfect on football at a tender age as it was her passion.

In 1997, Carli Lloyd went for three years to the Delran High School, where she showed good tactics and skills on the pitch in the midfield section. From 2001 to 2004, Lloyd went to Rutgers University and won great awards getting thus getting immense recognition.

In the year 2013-2014, Lloyd played in the Western New York Flash league. She entered in Houston Dash league in 2015 for two years, and as of 2017 until now, she plays in the FA WSL Spring Series for Manchester City. She also played in the FIFA World Cup in 2015.

In 2007, Carli Lloyd won the Algarve Cup MVP & Top Goal Scorer. Lloyd received the Glamour Award for The Unstoppable in 2012. In the year 2013, she was put on the Rutgers University Hall of Distinguished Alumni. In 2015, she made history as the first woman who was able to score a hat-trick in the finals of FIFA Women's World Cup, which was the first ever since Geoff Hurst’s 1966 for both male and female. In 2016, Lloyd was awarded the FIFA World Player of the Year in 2016. She also received The Best FIFA Women’s Player in 2017.

Carli Lloyd has been involved in philanthropic works in conjunction with Habitat for Humanity.