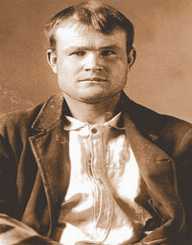 When Butch Cassidy was a teenager, he left home, in hopes of earning some money to help support his family. At first, he made an honest living, working on ranches. All of that changed when he met a man named Mike Cassidy. Mike had a reputation for being a thief, stealing mostly livestock and horses. Butch Cassidy was impressed by Mike’s skills, and he was certain he could earn more money stealing than by working.

So, Butch decided to change his name from Robert Parker to Butch Cassidy, to not bring shame to his family name. (He was also known to use other fake names, including Jim Lowe and Santiago Maxwell.) He knew what he was doing was wrong, but nothing was going to stop him from becoming rich--especially not the law.

Butch Cassidy’s career began with a few basic robberies as he slowly built himself up to commit more serious crimes. His first major robbery was in 1889 when he and three partners robbed a bank and stole over $20,000. However, for the most part, he continued to steal horses and livestock. Eventually, he was caught and jailed in 1894.

Butch Cassidy was released from jail in 1896, but his time in the slammer did little to reform him. Around the same time as he was released, Butch Cassidy began working with Harry Longabaugh, who would later be better remembered by the name “the Sundance Kid.” Together, the two criminals wreaked havoc in the western United States. Some of the other famous criminals he would go on to work with included The Tall Texan and Kid Curry. Cassidy’s group of criminal misfits would later be known as “The Wild Bunch.”

Along with the Wild Bunch, Cassidy moved on to bigger and better things, now focusing on robbing banks and trains, rather than stealing animals. The American public was enthralled with the stories of Butch Cassidy and his gang, but the policemen and other authority figures were less enthused about him. Around the mid-1900’s, the Union Pacific Railroad, tired of being robbed, hired the Pinkerton National Detective Agency to hunt down Cassidy and the Wild Bunch. The gang soon heard of this and fled the United States to hide out in South America.

Butch Cassidy died on November 6, 1908, in San Vicente, Bolivia. It is guessed that the cause of Cassidy’s death was by policemen shooting him. However, no one knows what happened for sure. Some speculate that he might have died at the hands of someone else, or that he may have returned to the United States under a different name. He was 42 years old when he supposedly passed away.

Many books* and movies (both fictional and nonfictional) have been made about Butch Cassidy and his adventures with the Wild Bunch. Some of these are listed below.