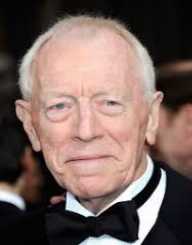 Swedish actor Max von Sydow was born Carl Adolf von Sydow in Lund, Sweden on the 10 April 1929 to Margareta Rappe and Carl Wilhelm von Sydow. His mother was a teacher and his father a university professor.

His father had some German ancestry on his paternal side. Von Sydow became interested in acting when he was in his teens and was in an acting club with other students in high school.

Max von Sydow was a pupil at Lund Cathedral School, did his national service and then studied drama at the Royal Dramatic Theatre in Stockholm (1948-1951).

Max von Sydow made his screen debut in Only A Mother (1949), followed by Miss Julie (1951) both directed by  Alf Sjoberg. Von Sydow relocated to Malmo, Sweden in 1955. He was introduced to the film director Ingmar Bergman and worked under his direction at the Malmo Municipal Theatre.  He starred in more than a dozen films directed by Ingmar Bergman including The Seventh Seal (1957), The Magician (1958) and The Virgin Spring (1960).

Von Sydow also voice acted on video games including Ghostbusters: The Video Game (2009). Max von Sydow made numerous appearances on television from 1957 onwards including television films and guest starring on various television shows. In 2016, he appeared in three episodes of the television hit show Games of Thrones as Three-Eyed Raven.