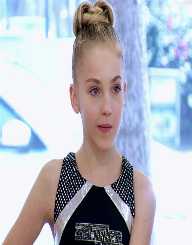 The next generation will surely be a bomb in regards to talent showcase. There are a lot of talents that are ready to showcase their talents if given the enabling atmosphere to do so. Brynn Rumfallo is not left out as she was able to showcase her talent because of the enabling atmosphere. She won her recognition in 2013 after being part of the dance team, fresh faces which competed in the American Got Talent. Her team was able to reach the quarterfinals before being eliminated.

Brynn Rumfallo was given a chance to appear as a guest on the next season of the show. By 2015, she has achieved a whole lot of recognition and was able to appear in three episodes of Lifetime’s Dance reality show. She later got touted as the Next Maddie after the departure of Maddie from the show. She was also able to perform Dancing with the Stars with Maddie Siegler in that same here. Later on, she appeared in Todrick Hall’s music video before modeling for Miss Fit.

Brynn Rumfallo started dancing when she clocked two. She was so much interested in dance that she joined Club Dance Studio in Arizona in 2006. She trained with Alexa Moffett who later became her role model. She got auditioned as a member of the group Fresh Faces for America’s Got Talent. Her team made it to the show but got eliminated in the quarterfinals. She did not let that bother her as she kept moving forward in her career. She eventually got named in 2014, the National Mini Female Best Dancer.

Brynn Rumfallo got placed among the juniors at Hall of Fame Nationals Las Vegas with her solo performance, Breathe. She later got featured in the Show Dance Mom with one of her Club Dance teammates. She went on to appear in three episodes which led her to get invited for the show’s next season. It was there; she took up a permanent spot in ALDC team. She later joined the Elite team after being pitted against Maddie Ziegler, Jojo Siwa, and Kendall Vertes that she later defeated.

Brynn Rumfallo is a talent on her own as she has a very good background in ballet dancing in addition to the fact that she is a talented dancer. She has won numerous accolades as well as awards with her incredible dance steps. She is known to have through her steps impressed the famous Abby Lee, her teacher, who gave positive comments about her. Brynn Rumfallo has also been admitted by many people including the Assistant to Abby to be a very versatile dancer. She is envisaged to be one of the most successful dancers in years to come. Many fans consider to be a very great dancer in her clime and have won numerous competitions outside of Dance Moms.

Brynn Rumfallo faced a lot of difficulties in establishing herself as one of the primary members of Dance Moms, a dance reality show, despite the fact that she has a great performance. Her coach, Abby Miller, had an interest in her after Maddie Ziegler left the show. However, this led to her being bullied by other Dance Moms. She faced a lot of problems and had a reputation for being an outcast of the team. Brynn Rumfallo was also snubbed by other moms when she won a challenge to enter the ALDC team. Soon, she got blamed for the refusal of her male partner to go onstage with her despite being ready to backstage though she was nervous at first.

Brynn Rumfallo is the first daughter of Ashlee Allen and Aaron Rumfallo. She has two younger siblings of which one is a male and other a female. She is a lover of pets especially dogs. She is also known to be a backup dancer for Katy Perry as well as a great fan of Rihanna. She is always willing to have a chance to meet with Rihanna. Brynn Rumfallo won a scholarship and attended ALDC Booty Camp where she met Kalani Hilliker and Sarah Reasons as well as Teacher Alexa. It was after this that she joined Dance Moms around 2014.