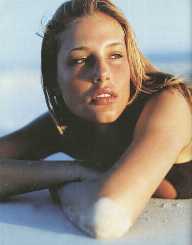 Bridget Hall was born on 12th December 1977, in Arkansas, United States. She was born in a town called Springdale, with one sibling, an older brother called Joshua. The family moved to Farmers Branch in Dallas, Texas, and this is where Hall began her modeling career, at age ten. She was enrolled at R. L. Turner High School, but after a short while, dropped out to concentrate on her career.

She moved to New York with her mother to pursue her modeling career and had wonderful success. She began with Ford Models but then moved to IMG Models. In a few short years, by the time she was 18, Bridget Hall was listed in Forbes as one of the “best ten” moneymaking supermodels. She was in the elite company of Cindy Crawford and Christy Turlington.

Bridget Hall has been in over 200 fashion magazines and has graced the covers of top fashion magazines such as Vogue, Harper’s Bazaar, ELLE, and Allure. She has also been on the catwalk for fashion shows in Paris, Milan, and New York'.

Bridget Hall is looking forward to moving into the film industry and awaits the roles that will soon come her way.