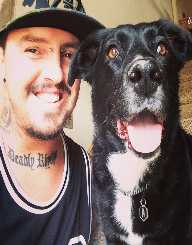 Branden Steineckert was born on April 21, 1978, in Pocatello, Indiana, USA.

As a child, Branden Steineckert was determined to become musically inclined if he wasn’t already. Sadly, his father died when he was young, but he left behind the inspiration for his son. His father had loved to play music, which inspired Steineckert to learn how to play the drums (better than he already knew how to play them, as his father had taught him some of the basics before he passed away). Now, he professionally plays the drums, living out his wildest dreams.

The first band which Branden Steineckert professionally played with was The Used. He helped to form the band in 2001, along with Bert McCracken, Quinn Allman, and Jeph Howard. The band was only together for a year before signing on with Reprise Records. In the same year, they released their first album: The Used. In 2003, the band released never-before-seen behind the scenes work that their band had done in the CD/DVD combo Maybe Memories. Their second album, In Love and Death, was released two years later, in 2004.

In 2006, Branden Steineckert left the band. Most of this reasons for leaving the band are blurry, but it seems like he was no longer getting along with other members of the band either because of creative or personal differences. He was then replaced by Dan Whitesides. The band still performs music (as of 2017). Since Steineckert departure from the band, Quinn Allman has also left the band (2015) and was replaced with Justin Shekoski.

After leaving The Used, Branden Steineckert joined the band Rancid, replacing their old drummer, Brett Reed. The band had first formed in 1991 with members Tim Armstrong, Matt Freeman, and Brett Reed. Shortly after the beginning of the band, Armstrong was replaced by Lars Frederiksen. The band’s members, beginning in 2006 were then Freeman, Frederiksen, and Steineckert.

The band had released eight albums before Branden Steineckert joined the band. Their first album with him as a new drummer was Let the Dominoes Fall, which was released in 2009. After the album was released, the band went on a tour of the United States, along with other punk rock bands. In the same year, the band also released a CD/DVD of their music.

In 2010, while still a member of Rancid, Branden Steineckert played as a touring member of the band Goldfinger for one tour, as their drummer was not able to perform.

In 2011, the band went on another tour, even though they had not released a new album since their last tour. They performed alongside another punk rock band, Blink-182. In 2012, they released their first song in years, F**k You. In the same year, they included the new song on a best hits album. They have since then released two more albums with Steineckert, ...Honor Is All We Know (2014) and Trouble Maker (2017). The band plans to go on tour in the summer of 2017 and to continue producing music long after that.