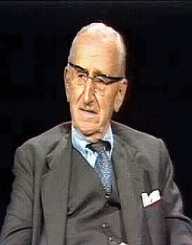 Friedrich von Hayek is a well-known Austrian-British philosopher and economist best known for his defence of classical liberalism. He spent his career working tirelessly at the University of Chicago and Albert Ludwig University of Freiburg and earned his Nobel Prize in Economic Sciences in 1974 alongside Gunner Myrdal.

Friedrich August von Hayek was born to parents August von Hayek and Felicitas Hayek nee von Juraschek in Vienna on May 8, 1899. His father, August, was a passionate physician for botany, an employee of the local ministry of health and was a lecturer at the University of Vienna. His mother was the daughter of a wealthy landowning family.

His parents had three sons, Hayek is the oldest followed by Heinrich who is one and half years his junior and Erich five years younger. Notably, the profession of his father and the distinguished careers of his family greatly influenced his goals in later life. As a second cousin to Ludwig Wittgenstein, he had the privilege of reading his philosophical book and meeting him occasionally which had a profound influence on the way he thought.

At a very young age, Friedrich von Hayek displayed intellectual advancement by reading fluently before going to school. During his teens, he enjoyed reading genetic and evolutionary works of Hugo de Vries and Ludwig Feuerbach. In school, he was impressed by lecturer Aristotle ethics.

In 1917, he joined the Austro-Hungarian Army and fought on the Italian front. During the war, he damaged in his left ear and was noted for bravery. The problems that occurred during the war influenced him to choose a career that would help him to make the world a better place.

Friedrich von Hayek enrolled at the University of Vienna in 1918 where he earned his doctorates in law and political science in 1921 and 1923. He also studied philosophy, psychology and economics and shortly after the university was closed, he joined Constantin von Monakow’s Institute of Brain Anatomy. He did his first intellectual project and published it in 1952 as ‘The Sensory Order.’

Upon completion of his exams at the University of Vienna, Friedrich von Hayek started working for the Austrian government pertaining the legal and economic details of the Treaty of Saint Germain. Later in 1923-1924, he worked as a research assistant to Professor Jeremiah Jenks of New York University and helped him compile data on the operations of the US Federal Reserve.

After reading von Mises’ book ‘Socialism,’ he shifted his thinking from socialism to classical liberalism and begun attending his private seminars. In late 1920s Mises helped him to serve as the founder and director of the Austrian Institute of Business Cycle Research before joining London School of Economics in 1931.This arrival to London influenced many grounds breaking works and developments of modern microeconomics.

In 1929, Friedrich von Hayek joined the University of Vienna where he worked as a lecturer and published his first book ‘Monetary Theory and Trade Cycle.’ While working at the London School of Economics in 1931, he gave a series of lectures which were later published as ‘Prices and Production’. This lectures later led to his appointment as a Tokke Professor of  Economic Science and Statistics, at the University of London.

Additionally, in March 1944, the Routledge published his book ‘The Road to Serfdom’ which became popular in Britain. Later in September, the book was released in the United States by the University of Chicago followed by the American Magazine ‘Reader’s Digest’ in April 1945 which enabled it to reach a wider audience.

By and large, Friedrich von Hayek conducted many influential seminars while working at the University of Chicago in 1940s some academics worked on his projects leading to the establishment of a law program in the Chicago Law School known as ‘Law and Society.'

In 1950, Friedrich von Hayek left London School of Economics and became a professor in the Committee on Social Thought. In 1954, he received a Guggenheim Fellowship. Later in 1959 he edited John Stuart Mill’s book ‘The Constitution of Liberty’ and published it in 1960.This book did not receive enthusiastic reception like ‘The Road to Serfdom.'

From 1962, he worked at the University of Freiburg, West Germany and worked on his next book ‘Law, Legislation, and Liberty.’ He retired in 1968 and continued working as a visiting professor at the University of Carolina where he taught graduate seminar and philosophy of social science. He published his book ‘Law, Legislation and Liberty’ in three volumes in 1973, 1976 and 1979.

Later in 1969-1977, Friedrich von Hayek moved to Freiburg where he became a professor at the University of Salzburg. On October 9, 1974, he was awarded the Nobel Memorial Prize in Economics alongside Swedish economist Gunnar Myrdal. In 1980, he started working on ‘The Fatal Conceit: The Errors of Socialism’ where he refuted the theory of socialism but died before completing it, and William Warren Bartley edited the work.

Fredrich von Hayek is famously known for his book ‘The Road to Serfdom’ where he attacked Socialism and sold over two million copies. The book is known to date and has been cited by many scholars and commentators.

Triumphantly, Friedrich von Hayek earned the award 'Nobel Memorial Prize in Economic Sciences' alongside Gunnar Myrdal in 1974. In 1991, he received the US Presidential Medal of Freedom from President George.H.W.Bush.

He married Helen Berta Maria von Fritsch in August 1926, and the couple had two children; Christina Maria Felistas and Lorenz Josef Heinrich. Several years after his marriage with Hellen, he started having an affair with his cousin, Helene Bitterlich, claiming that he was not happy in his marriage. His wife Helen Berta Maria initially refused to divorce him but agreed in July 1950. Weeks later, he married Hellen Bitterlich.

Although his theories were not absorbed initially, from the 1980s after the fall of Soviet Block, his contributions were reassessed, and today they are considered as secondary literature. Several institutions have been named in his honour such as; Hayek Society at the London School of Economics and the University of Oxford. Moreover, he was honoured through Hayek Fund for Scholar at Institute of Human Studies in California USA and The Hayek Fund.

Additionally, an economic essay award at George Mason University is named in his honour. Every year, Ludwig von Mises Institute holds a lecturer at its Austria Scholars conference named after Hayek where academics are invited to speak on topics relating to his contributions.