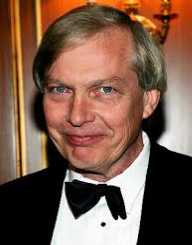 Bob Edwards is an American radio host and journalist.

Robert Alan Edwards was born in the city of Louisville, Kentucky, on May 16, 1947. He studied at the Saint Xavier High School. After that, he attended the University of Louisville. He later got a master’s degree from American University in Washington D. C.

Bob Edwards began his career at a small radio station. It was located in the town of New Albany, Indiana. In 1969, he was sent to serve in the War in Korea. There, he worked on the radio and TV news for the American Forces Korea Network. In 1972, he anchored the news for the Mutual Broadcasting System.

In 1974, Edwards joined the National Public Radio. He was one of the co-hosts of the news program All Things Considered. In 1979, he became the host of the news program Morning Edition. He stayed at that position for almost 25 years. He became well-known for his interviewing skills. He interviewed more than twenty thousand people. The show became the second most popular radio program in the United States.

In 2004, the executives suddenly decided to remove Edwards from the job. The station received thousands of letters of complaint from his loyal fans. He was then offered the position of a senior correspondent for NPR News. He declined the job, and he left the station.

Bob Edwards soon started his radio show. It was produced by Sirius XM Satellite Radio. He conducted interviews, and he announced the news. The show stayed on the air until 2014.

Edwards has also written several books on radio broadcasting. His first book was Anybody Who Needs to Be Sure is in Trouble, published in 1982. In 1993, he released Fridays with Red: A Radio Friendship. In 2004, he published Edward R. Murrow and the Birth of Broadcast Journalism. In 2011, he released A Voice in the Box: My Life in Radio.

Bob Edwards has honorary degrees from Spalding University, Willamette University, the University of Saint Francis, Bellarmine University, DePaul University, Albertson College, and Grinnell College. He won a Peabody Award in 1999. In 2004, he became a member of the National Radio Hall of Fame. He was also chosen into the Kentucky Journalism Hall of Fame.

The Bob Edwards Show received numerous awards. They include the Gabriel Award, the Sigma Delta Chi Award, the New York Festival Gold World Medal, and others.