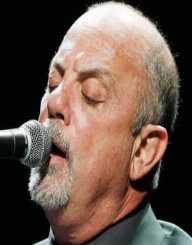 William Martin Joel best known as Billy Joel is an American singer, songwriter and a pianist. Born on May 9, 1949, he has released several hit songs and has chalked out his name in the American music history. His song, Piano Man, released in 1973 has since made him the third best-selling solo artist as well as the sixth best-selling recording artist in the United States.

The award-winning singer’s compilation album Greatest Hits Vol. 1 & 2 stands as one of the best-selling albums in the United States. The six times Grammy Award winner has made it on to the Top 40 hits on several occasions. He has won numerous awards and has been inducted into four Hall of Fames. Selling more than 150 million records worldwide, Joel has become one of the highest-selling artists of all time.

William Martin Joel was born on May 9, 1949, in the Bronx to Howard Joel and Rosalind. His father was a pianist. Joel’s parents divorced in 1957 making his father move to Vienna, Austria. Joel, however, lived with his mother. At a young age, Rosalind employed the services of a piano teacher for Joel, and he began to receive piano lesson unwillingly. He also took up boxing lesson and boxed at the amateur Golden Gloves circuit, but after winning 22 bouts, he quit the sport because he had a broken nose during a fight.

Billy Joel was educated at the Hicksville High School, but his failure to sit for English exams prevented him from graduating with his class. The failure was as a result of playing piano bars for his mother and a day before the English exam, he was playing a late-night gig. He left the school in 1967 but instead of attending summer school to earn a diploma chose to venture into music.

In his words he said, if I’m not going to Columbia University, I will go to the Columbia Records which does not require a high school diploma to be there. He, however, submitted an essay after 25 years to the Hicksville High School to be awarded a diploma at their annual graduation ceremony in 1992.

Billy Joel music career was influenced by popular groups like The Drifters, The Beatles and The Four Seasons and the early rock-and-roll and rhythm-blues artists. Defining the type of music he wants to do, he joined the group Echoes at age 16. The band began recording in 1965 with Joel mostly on the piano in most of their records. Joel also played on the Shangri-Las’s demo of Leader of the Pack and Remember. The band changed its name to Emeralds and later to Lost Souls.

In 1967, Billy Joel moved on to join the Hassles which was signed to the United Artists Records.  The band released two albums, The Hassles and Hour of the Wolf and four singles but all the releases failed commercially. Two years on, Joel left the group with drummer Jon Small to form the duo Attila. The group released its debut album in 1970.  However, the group ended shortly after the album when Jon found out Joel was dating his wife, Elizabeth.

After the disbandment of Attila was signed by the record company Family Production. The company was owned by Artie Ripp with support from Gulf + Western. According to Ripp, he invested an amount of $45,000 in Joel development, but the result from his first album was a disaster. Joel’s debut solo album, Cold Spring Harbor was technically and commercially flop. It was mastered at a wrong speed and had other technical issues.

To promote the album, Billy Joel embarked on the Cold Spring Tour in 1971 with a band composed of drummer Rhys Clark, guitarist Al Hertzberg and Larry Russell on bass guitar. They toured throughout the U.S and Puerto Rico doing openings for groups like the J. Geils Band, Taj Mahal and The Beach Boys. In 1972, he signed a recording contract with Columbia and moved to Los Angeles.

In 1973, Columbia released Joel’s first album with the company, Piano Man. The album had moderate sales and Joel formed a new band for the albums tour in Canada and US. After the tour, Joel had a more extensive fan base, and his songwriting style was well received. Joel's second album with Columbia was Streetlife Serenade which was released in 1974. A track on the album The Entertainer made it to number 34 in the US hit. The album could not meet the standard of Piano Man, and it is seen as one of his weakest album. His third album was Turnstiles recorded after Joel had moved in New York

After the third album, Billy Joel was introduced to Phil Ramone by Columbia Records to produce all his studio albums. Their pairing brought much success to Joel as his studio album, The Stranger was received well and became a commercial success. The album produced four Top-25 hits on the Billboard charts and was certified multi-platinum. A song on the album Just the Way You are won Grammy Awards for Record of the Year and Song of the Year. He followed it with the release of 52nd Street in 1978. Once again, the album was successful selling seven million copies.

Billy Joel's next album was Glass House in 1979 which was also a hit staying on the Billboard chart as number one for six weeks. It also won Best Rock Vocal Performance, Male at the Grammy Awards and an American Music Album. Joel also released albums like The Nylon Curtain, An Innocent Man, 1983,and released the Greatest Hits Vol 1 and 2 which was highly successful and was certified double diamond by the RIAA. It sold over 11.5 million copies and subsequently became one of the best-selling albums in American music history.

Joel released The Bridge, 1986, Storm Front, 1988 and River of Dreams. He has since then embarked on several tours with the likes of Elton John among others. His final tour was at the Nassau Coliseum on August 4, 2015.

Billy Joel has married four times. His first marriage was to Elizabeth Weber Small on September 5, 1973, but divorced on July 20, 1982. He then had a romantic relationship with Elle Macpherson before marrying his second wife Christine Brinkley in March 1985. The couple had a daughter Alexa Ray Joel. They divorced on August 26, 1994. Joel married his third wife Katie Lee and separated in 2009. Joel’s fourth and last marriage was to Alexis Roderick on July 4, 2015. They have since been blessed with a daughter Della Rose Joel. He is a secular Jew and an atheist.