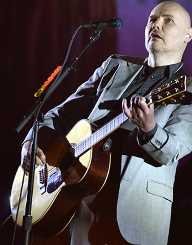 Billy Corgan was born on March 17, 1967. He is an American musician, songwriter, poet, producer, and entrepreneur. He is popularly known as a member of the band ‘Smashing Pumpkins’.

Billy Corgan was born in March 17, 1967 in Chicago, Illinois. He was born to William Corgan Senior who is a blues and rock guitarist and Martha Louise Maes Corgan Lutz. He was born into a Catholic family. He was brought up alongside his brother Ricky. In 1970, his parents divorced. His father remarried and he went to live with his father and stepmother. He was physically and emotionally abused by his stepmother.

Billy Corgan attended Marquardt Middle School where he was an active athlete. He later joined Glenbard North High School where he was an average athlete. He began playing guitar when he saw his friend’s guitar. He graduated high school as an honour student as he performed in many bands in high school. In 1985, he moved to Florida with his band ‘The Marked’. The band later dissolved and he went back to Chicago where he lived with his father. In 1987, he performed with Wayne Static in Static’s band ‘Deep Blue Dream’.

When Billy Corgan returned to Chicago, he met guitarist James Iha with whom they began recording demos. He later met bassist D’arcy Wretzky. The trio formed the ‘Smashing Pumpkins’. They played together in local clubs. They later recruited drummer Jimmy Chamberlin. In 1988, the band played for the first time as a quartet. In 1991, the band released the album ‘Gish’ which was a success. In 1993, the band released their second album ‘Siamese Dream’ which became a multi-platinum hit. The album’s singles ‘Disarm’ and ‘Today’ became a hit.

In 2001, Billy Corgan formed the band ‘Zwan’ with Chamberlin and Matt Sweeney. They later recruited guitarist David Pajo and bassist Paz Lenchantin. In 2003, the band released the album ‘Mary Star of the Sea’. In the same year the band broke up. In 2004, Corgan published a book of poetry titled ‘Blinking with Fists’. He also posted autobiographical writing online under the heading ‘The Confessions of Billy Corgan’. In 2005, he released his first solo album titled ‘The Future Embrace’ though it was not so successful.

Billy Corgan has suffered from depression since he was a young child. In 1996, his mother died, and he wrote the song ‘For Mama’ in her memory. ‘For Mama’ was one of the singles in the Adore Album. In 1993, he married Chris Fabian, but they divorced in 1997. He has dated many women, but he has not married again. He has a son with his girlfriend, Chloe Mendel. His child is called Augustus Jupiter Corgan. He is currently fifty years old.