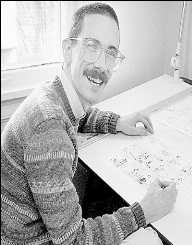 Bill Watterson was born on July 5th, 1958. His place of birth was in Washington D.C. He was famous for his cartoonist drawing skills. One of his creations that made him famous was the "Calvin and Hobbes." This cartoon was based on the story of a rowdy boy who had an imaginary tiger friend and later on went to become famous. The drawing was something that Watterson began while he was still young. He kept drawing while in high school and college. During his youth years, Watterson had made up his mind on the cartoonist career that he would later undertake in life.

Bill Watterson was born on July 5th, in 1958 in Washington D.C. in the U.S. His father was called James G. Watterson. He worked as a professional patent attorney. His mother was Kathryn. The couple had two sons, Watterson and his brother Thomas. At the time when Watterson was aged six, the family migrated to Chagrin Falls, Ohio. This move was to make sure that their mother was close to their sons during their early upbringing. Kathryn found it wise to live in a small town, and therefore they shifted. After settling down in Ohio, Watterson’s mother entered the city council after winning herself a seat there.

Watterson began drawing when he was eight years old. From this time, he felt that it was his passion to engage in the activity. This influenced his later life as he spent his free time drawing. In school, he also ventured into artistic activities that revolved around drawing. With the support he gained from his parents, Watterson took his career path seriously right from the time he was a child. Classic cartoonist idols such as George Herriman and Charles Schulz were his main inspirations to pursue cartoonist as a career. In high school, Watterson showcased his talent by drawing cartoons for the school’s newspaper and its yearbook.

Soon, Watterson enrolled for his college education at Kenyon College located in Ohio. This was in 1976. While in college, he became famous for his political based cartoons for the college newspaper. Four years later, in 1980, he graduated from the college. Having gained recognition over the four years, he spent drawing in college; he was immediately offered editorial cartoonist employment at the Cincinnati Post.

Working at the Cincinnati Post marked the beginning of his career as a cartoonist. However, his first job was not a successful one as the editors were not impressed with his abilities. Months later, he was unemployed and living with his parents yet again. His first failure in this made him drop his political based cartoons. He opted to work on what he loved most, comic cartoons.

Things did not work out well over the coming years for Watterson. He spent time drawing his comic strips and sending them to various newspapers, but none of his efforts bore fruits. During this hopeless period, there is a time that he worked as an advert designer for grocery stores and car dealerships. Later on, Watterson came to appreciate the bitter experience that he went through. This is because it revealed to him that his work was more than just money. He had to show passion and dedication to succeed.

Rise To Stardom- “Calvin And Hobbes”

After realizing that he had to work to fulfill his desires, Watterson created the characters Calvin and Hobbes and named his comic strip “Calvin and Hobbes.” The comic strip went on to be published in 1985. Later on, Watterson attested to the fact that his inspirations to coming up with such comic creations were iconic cartoonists such as Charles Schulz, George Herriman, and Walt Kelly. He employed their cartoonist works in developing his interesting new characters. The stories developed in his comic book were based on real-life experiences for Watterson. For example, the fact that he took cycling as his hobby was reflected in his cartoonist works.

The success of his strip earned him an award in 1986. Watterson was the youngest cartoonist to be bestowed with National Cartoonists Society's Reuben Award. This was the highest honor in the industry.

Watterson continued to entertain his fans with his comic works. However, in 1995, he publicly announced that he was ending his comic strip. His final piece on the famous strip “Calvin and Hobbes” was released on December 31st, in 1995.

In 1983, Watterson got married to Melissa Richmond. Together they live in Cleveland where they get to maintain their private lives private.