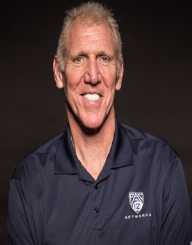 Bill Walton From UCLA To NBA Hall of Fame

This Hall-of-Famer turned sportscaster’s story begins in La Mesa, a city in the Southern Californian county of San Diego. There he was born to Gloria Anne and William Theodore Walton II some sixty-five years ago.

Bill Walton III spent virtually all of his childhood in the city. He attended Blessed Sacrament Elementary School, and it was here, in fourth grade, that he first encountered the sport. He credits coach Frank “Rocky Graciano for sowing the seeds of interest.

Bill Walton carried this interest with him to high school. He got enrolled at Helix High where it didn’t take his new coach very long to realize his potential and draft him for the high school basketball team.

Under the tutelage of Gordon Nash, Bill would go on to represent his high school at the California Interscholastic Federation games, which saw him lead his team to victory for two years running. That period included a 49-game winning streak.

His performances earned him rave reviews, which in turn earned him a spot on the United States Senior Men’s National Basketball Team. It was the first time a high school amateur made the team, and it is a distinction that has stood the test of time down to the present.

His field goal percentage, a remarkable 79 percent, similarly remains unrivaled. Today, he stands tall in the company of only one other high school basketballer to be inducted into the National High School Hall of Fame. The best was yet to come.

This seventeen-year-old six right-handed shooter would go on to gain admission into the University of California, Los Angeles in 1970. John Wooden, UCLA Bruins coach at the time quickly formed an excellent relationship with the young lad to honing his skills even further.

Bill Walton was fully aware that the most promising rising talent in national basketball was to come under his stewardship. In time, Wooden managed to develop bill into the finest center in all of college basketball.

Before that, however, Bill Walton had to raise his game and develop a professional work ethic while he played for the freshman team in 1970. Unlike today, freshmen were deprived of the privilege of playing for the varsity team right off the bat.

He played a starring role in that team’s peerless success, leading them on an unbeaten run, which lasted the entire season. His outstanding performances in the run-up to set that particular record left a lasting impression in the minds of his varsity coach and teammates.

It was with their support that he walked right into the team in his sophomore year. In turn, he would lead them on two consecutive unbeaten seasons from 1971 to 1972(30-0 twice). During that time, the UCLA Bruins beat their opponents by more than thirty points on the average.

The streak, which was extended to 88 games, would go on to set the National Collegiate Athletic Association record for the longest winning streak in the history of the championship. As of then, Bill had gone on a personal unbeaten streak stretching back to his junior high basketball days.

By the end of his third season of varsity basketball, he had become a force to reckon with, and the accolades began to pour in. That year, he was awarded the prize for the best amateur athlete in the United States – the James E. Sullivan Award. Before that, he had been honored with the award for NCAA Player of The Year in 1972 and had retained the award on the back of stellar showings in the Bruins’ second unbeaten season.

Bill Walton’s senior year didn’t bring the successes that had characterized the prior three years with Bruins losing their seven-year stranglehold on the collegiate basketball championship after they fell to North Carolina State.

By then, however, he had left an indelible mark, especially his 44-point salvo against Memphis State in the finals of 73, which would make him the number one NBA draft pick for Portland Trail Blazers.

After a brief stint with the San Diego Conquistadors, Bill Walton was ready for primetime with the Portland Trail Blazers when he joined up in 1974. His first two years in Oregon in the Western Conference, however, were derailed by injuries – injuries that would plague the remainder of his career. His absence impacted the team’s performance and without their marquee signing, they did not make it to the playoffs for two seasons. The Blazers had to wait till the 76 - 77 season to enjoy Bill’s services at the center.

That happened to coincide with the appointment of Jack Ramsay as head coach. Under his guidance, a fully fit Walton topped the conference in tallies for most rebounds as well as most block shots.

Bill Walton put in masterful performances match after match and was crucial to curtailing Kareem Abdul-Jabbar when the Blazers came up against the L.A Lakers in that year’s Western Conference finals. Going into the playoffs as underdogs against the Philly 76ers, Bill and co pulled off a stunning upset winning 4 – 2. Bill was included in the NBA All-Star Game that season.

The next season saw him raise his game to the next level and Portland was shaping up to retain their title after victory in all but ten of their first sixty matches. Sadly, it was not to be because Bill Walton got injured in his foot and ankle before the conference finals and though he would return for the playoffs, the injuries recurred and the Seattle Supersonics won the title.

Bill Walton struggled with them for the rest of his playing career with the Clippers and the Celtics. Regardless of the injuries, he had shown enough to merit the MVP award and a spot in both the First All-Defensive Team and All-NBA First Team.

Bill would become an NBA champion eight years later with the Boston Celtics after an injury-stricken stay at the San Diego Clippers (now L.A Clippers) – a season in which he played the most games (80) in his career. He was honored with the NBA Sixth Man Award for his performances. Injuries resurfaced and he promptly retired from the sport in 1990.

After parting ways with his beloved sport, he continued to struggle with his ankles, which had to be fused by a surgeon to stop the damage. Three years later, he became a national Basketball Hall-of-Famer as well as a sports Hall-of-Famer in Oregon.

His legacy was written in stone. Outside the sport, he managed to channel some of the willpower that took him to the pinnacle in overcoming a stammering problem. This personal triumph inspired him to take up sportscasting and commentary in Basketball.

Bill Walton has since worked in that capacity for various networks including ESPN, CBS, and NBC. He is currently in the employ of ESPN after a brief hiatus, which lasted from 2009-2012 when he had to deal with spinal issues stemming from his playing days.

Outside of his new role in the sport, he is a big music fan and his passion for the art led him to establish a satellite radio show. It is called One More Saturday Night – an allusion to a The Grateful Dead song. The band and Bob Dylan are favorites of his.

Bill Walton is a proud father of four sons. One of them, Luke Walton, followed in his footsteps and became a two-time NBA champion with the L.A Lakers (2009, 2010).