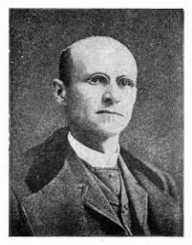 Bill Nye was an American humorist and journalist.

Edgar Wilson Nye was born in the town of Shirley, Maine, on August 25, 1850. His parents worked as farmers. He studied in the city of River Walls. He tried several jobs, including farming, milling, and teaching. He ultimately decided to become a lawyer. After a few failed attempts, he finally passed the bar exam in 1876. He moved to the town of Laramie, Wyoming. He became a notary and a justice of the peace in the judicial district.

Bill Nye occasionally wrote short pieces for various newspapers. He used the pen name - Bill Nye. One article of his appeared in the Chicago Times. The first work that brought him some exposure was a column that he wrote for the Denver Tribune. He briefly worked for the Democratic newspaper Laramie Sentinel.

In 1880, the Republicans in the area formed a new newspaper called Boomerang. They hired Nye as an editor and humorist. He became quite popular. In 1883, he moved to Hudson, Wisconsin. He worked on new material, and he also became a lecturer. A few years later, he relocated to New York City. He became a columnist for the magazine New York World. Shortly after that, he moved to Arden, North Carolina. He continued his work, and his popularity grew. By the 1890s, he became the best-paid humorist in the United States. He still occasionally served as a guest lecturer.

Bill Nye wrote more than a dozen books. Many of them were collections of the writings he had published in newspapers. They included Baled Hay, Bill Nye’s Red Book, Bill Nye’s History of England, Bill Nye’s Comic History of the United States, and others. He also wrote two plays, and he had stage performances which toured the United States. He collaborated with other writers, such as James Whitcomb Riley and Luther Burbank.

Shortly after arriving in Laramie, Bill Nye met Clara Frances Smith. She was a music teacher from Chicago. They got married in 1877. They had four kids – Frank, Max, Bessie, and Winifred.

Bill Nye died of meningitis on February 22, 1896. He was 45 years old. He was buried in a church in Fletcher, North Carolina.

Bill Nye is still known as one of the best classic American writers of the era after the Civil War. There are historical marks made for him in Saint Croix County, Wisconsin, and Fletcher, North Carolina. There is also a monument showing his birthplace in Maine.