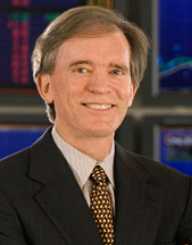 William Hunt Gross popularly known as Bill Gross was born on April 13, 1944, in Middletown, Ohio, United States. His father, Sewell Mark Gross was a sales executive for AK Steel Holding and mother Shirley was a homemaker. A first generation American, his family was initially from Winnipeg, Canada. They moved to San Francisco in 1954. Bill Gross earned a degree in Psychology from Duke University in 1966. After completing his graduation, he joined the Navy. He secured an MBA from the UCLA Anderson School of Management, University of California, Los Angeles in 1971.

During his final year in college, a horrific car accident sliced off a considerable portion of his scalp. As Bill Gross was recovering from his injuries, he happened to read a book titled ‘Beat the Dealer’ by Edward Thorp, a math professor at that time. The book dealt with the subject of making money and later became a cult favourite among the investors. There was a chapter in the book describing how to win at blackjack by using a system for counting cards.

As soon as Bill Gross recovered from his injuries, he reached Las Vegas, Nevada and started playing blackjack professionally. Over the next four months, he converted $200 into $10000 playing 16 hours a day. He is said to have applied some of his gambling methods for spreading risk and calculating odds to his investment decisions in his later life.

Bill Gross pursued a career in investment and fund management working as an investment analyst for Pacific Mutual Life between 1971 and 1976. Meanwhile, he completed his Certified Financial Analyst (CFA) program. From 1976 to 1978, he was the Vice President in the fixed income securities area of PML. In 1971, he co-founded the Pacific Investment Management Company (PIMCO) and assumed the position of the Managing Director and Chief Investment Officer, a post he held till 2014.

Under PIMCO, Bill Gross managed one of the world’s largest mutual funds including its Total Return Fund (World’s largest bond fund and fifth largest mutual fund with the US $252 billion in assets) and various other smaller ones. His primary focus was on bonds and hence, he was aptly named ‘the nation’s most prominent bond investor’ by The New York Times.

Bill Gross wrote and published two books on investment viz. ‘Bill Gross on Investing’ and ‘Everything You've Heard about Investing is wrong!’ in 1990. In September 2008, he netted the US $1.7 billion after the Federal takeover of Fannie Mae and Freddie Mac in which he was holding significant positions in agency-backed mortgage bonds.

Bill Gross was the first portfolio manager to be inducted into the Fixed-Income Analyst Society, Inc. (FIASI) Hall of Fame in 1996. He earned the distinction for his contributions to bond and portfolio analytic practices. In 2000, PIMCO was purchased by Allianz SE but continued to operate as an independent subsidiary. In September 2008, Bill left PIMCO and joined the Janus Capital Group. According to the 2011 Forbes report, Bill Gross is the 564th wealthiest person in the world with a net worth of US $2.1 billion.

Bill Gross married Pamela Roberts in 1968. Jeff and Jennifer are their two children. The couple got divorced later. He married for the second time in 1985, this time to Sue J. Frank. They are blessed with a son Nick.

Bill Gross is a well-known stamp collector. He has a complete collection of 19th century United States postage stamps. In October 2005, he purchased a unique plate block of the famous 1918 24-cent U.S. Airmail stamp at an auction for a whopping $2.97 million. The stamp featured an engraving of a Curtiss JN-4 biplane printed upside down which was referred to as ‘Inverted Jenny.’

Bill Gross then proceeded to trade the Inverted Jenny to Donald Sundman, President of Mystic Stamp Company, and a stamp dealer in exchange for a 1-cent 1868 ‘Z Grill’ depicting Benjamin Franklin (one of the only two known to exist) thus completing his 19th-century collection of U.S. postage stamps.

In 2005, Bill Gross donated a total of $23.5 million to Duke University out of which $20 million was set aside for financial aid. He gave an approximate amount of $25 million to Doctors without Borders over a period thus becoming the largest such donor in history. This includes his $9.1 million donation to Doctors without Borders/Médecins Sans Frontières in 2006 which he earned from the auction at Shreves Philatelic Galleries of his British philatelic collections.

In May 2008, Bill Gross donated the amount collected by auctioning his Scandinavian and Finnish collections at the Spink Auction House to Jeffrey Sachs Millennium Villages Project at Columbia University. He and his wife donated an amount of $20 million to Hoag Memorial Hospital Presbyterian for Women's Health and $10 million to the University of California, Irvine for setting up a stem cell research center at its school of medicine.

In 2016, they donated $40 million to the same Institute for establishing a nursing school. They also gave $20million to Cedars-Sinai (Los Angeles) for the new Sue and Bill Gross Surgery and Procedure Center in 2012. In 2013, the Gross couple donated $20 million to Mercy Ships. It will be a new hospital ship in addition to the present hospital ship Africa Mercy. The vessel will be named The Sue and Bill Gross Healing Hospital in honour of their donation and will provide medical services to the poor.