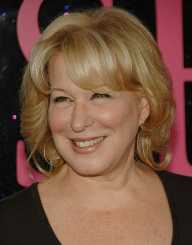 Bette Midler was born on December 1, 1945, in Honolulu, Hawaii, USA. Her parents are Ruth and Fred Midler. Her siblings are Daniel, Judith, and Susan Midler.

As a teenager, Bette Midler attended Radford High School. Midler briefly attended the University of Hawaii before dropping out to pursue acting as a full-time job.

Bette Midler first began her acting career as an extra in the film, Hawaii in 1966. Soon after, she moved to New York, where she worked as a theater actress. One of the most impresses performances she gave during this time was when she acted in a production of Fiddler on the Roof.

Bette Midler later left the theater acting after a short time on the stage to pursue a career in music. She would often sing at the Continental Baths. Soon after, the president of Atlantic Records heard Midler singing and offered her a contract shortly afterward.

Bette Midler released her first album, The Divine Miss M, in 1972. This album was highly successful and went platinum in both the United States and Canada. She quickly released a second, self-titled album, in 1973. This album was also successful, but not as successful as her first album. Throughout the rest of the 1970’s, Bette Midler continued to release albums through Atlantic Records. These albums include Songs for the New Depression, Broken Blossom, and Thighs and Whispers.

After the 1970’s, Bette Midler slowed down on the release of her new albums. Her next album, No Frills, was released in 1983. However, her album after that, Some People’s Lives, was not released until 1990. She released two more albums in the 1990’s, the latter with Warner Bros Records: Bette of Roses and Bathhouse Betty.

Bette Midler released her most recent album It’s the Girls! with Warner/Rhino Records in 2014.

Bette Midler’s theater acting career began in 1964 with her role in Fiddler on the Roof. In this play, she only acted as a replacement character. She continued to act as replacement characters throughout the rest of the 1960’s in a couple off-Broadway performances of Salvation.

The 1970’s were Midler’s most productive time on the stage. Bette Midler had three concerts on Broadway in this decade: Bette Midler, Bette Midler Clams on the Half Shell Review, and Bette! Diving Madness. She wrote the second of these acts, and she directed her last concert.

After the 1970’s, she did not return to Broadway until 2002 for a special benefit production of Short Talks on the Universe. In 2010, she leaped producing with the musical Priscilla, Queen of the Desert: The Musical. In 2013 she performed in the production. I’ll Eat You Last: A Chat With Sue Mengers. Her most recent play was produced in 2017: Hello, Dolly!

As mentioned earlier in this article, Midler’s first on-screen performance was in the film Hawaii. However, it wasn’t until the 1970’s that she earned his first credited role in a film (The Thorn as the Virgin Mary). Throughout most of the 1970’s, she continued to have small roles in television shows, films, and even in voice roles in projects like Vegetable Soup and The Rose.

In the 1980’s, Bette Midler received several more roles, mostly in films. Some of these films included Out and Out in Beverly Hills, Outrageous Fortune, Big Business, Oliver & Company, and Beaches. Midler also sang many of the songs in the film Beaches. This would go on to be one of the films that she would become best known for. In the 2010’s, the Lifetime television network remade Beaches, using some of Midler’s old songs from the first film.

The 1990’s were some of Midler’s busiest years on the screen. She spent time working on television shows (both animated and live action), made-for-television movies, and feature films. Some of her works from this decade include parts in the following: The Simpsons, Hocus Pocus, Gypsy, The First Wives Club, That Old Feeling, The Nanny, and Jackie’s Back!

Midler’s screen-time reduced in the 2000’s, but that is because she was busy with her newest project: Bette, a self-titled television series that Midler starred in. This show aired from 2000-2001. Some of the other projects she worked on during this decade included The Stepford Wives; Then She Found Me, and The Women.

Bette Midler is still active on screen in the 2010’s. So far in this decade, she has had a voice role in the children’s film Cats & Dogs: The Revenge of Kitty Galore and an acting role in the film Parental Guidance. Her most recent role was in 2017 in the film Freak Show.

All of Midler’s awards are for her singing and acting talents. Some of her most impressive awards are listed below.

Grammy Award for Record of the Year (Wind Beneath My Wings)

National Board of Review, USA NBR Award for Best Acting by an Ensemble (The First Wives Club)

Midler earned her star on the walk of fame in 1985.

Bette Midler married Martin von Haselberg in 1984. Together, this couple has one daughter: Sophie von Haselberg. Sophie is also an actress, like her mother.