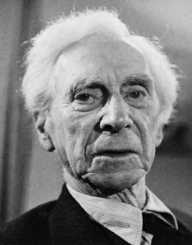 Bertrand Russell was born on 18 May 1872 at Ravenscroft, Trellech, Monmouthshire. His grandfather had twice served as Prime Minister and Queen Victoria had bestowed a title upon him, 1st Earl Russell. His father, the Viscount Amberley was an eccentric man, who was ahead of his time in supporting women’s suffrage and birth control. His mother Katherine Louise, daughter of the 2nd Baron Stanley of Alderley, was a suffragette and women’s right activist.  Bertrand Russell had two siblings: John Frank and Rachel.

Tragedy struck in 1876 when Bertrand Russell's parents and sister Rachel died. Bertrand went to live with his father’s parents at Pembroke Lodge, Richmond Park. His grandfather died in 1878, and after that, he was cared for by his grandmother. He was taught at home by tutors.

Bertrand Russell won a scholarship to Trinity College Cambridge and started to read for the Mathematical Tripos. He met Alfred North Whitehead and was encouraged to join the Cambridge Apostles. Membership of the society stimulated his interest in philosophy. In 1894, he completed the Moral Sciences Tripos. He spent some time as a young attache at the British Embassy in Paris, then moved on to Berlin studying social democracy.

Bertrand Russell's first appointment was at the London School of Economics where he lectured on German social democracy. He was also studying the foundations of mathematics which led to the publication of An Essay on the Foundations of Geometry in 1898. In 1899, he lectured at Trinity College, Cambridge,

In 1900 Bertrand Russell was in Paris, attending the International Congress of Philosophy when he met Peano. Returning to England, he started studying Peano’s work Formulario Mathematico. This, in turn, led to his famous discovery, Bertrand Russell's Paradox in 1901. In 1903, he published The Principles of Mathematics and in 1905, On Denoting. By 1910 he was lecturing at the University of Cambridge and publishing Principia Mathematica, in conjunction with Whitehead. It was this work that made him famous.

Bertrand Russell was a pacifist, and during World War I, fell foul of the law under the Defence of the Realm Act 1914. He was dismissed from Trinity College and fined a hundred pounds which he refused to pay. He was hoping to be to jailed as a protest. Instead, the authorities sold his books instead of payment.

In 1917, he again refused to pay another fine of one hundred pounds, and again the authorities directly sold his books. He was an anti-war activist throughout WWI. Finally in 1918, when he spoke out publicly against the United States involvement in the war, he was jailed. He spent six months in jail.

After the war ended in 1918, Bertrand Russell returned to Trinity College. He also spent some time travelling and lecturing Russia, China, and Japan. In mid-August 1921 he resigned from Trinity College.

He stood as a Labour candidate in Chelsea in the 1922 and 1923 elections but without much success. His next step was to set-up and Beacon Hill School between 1927 and 1932.

In late 1937 he was lecturing at the London School of Economics.

After visiting the United States in 1938 as a visiting professor at the University of Chicago, Bertrand Russell was offered a lectureship at the UCLA and moved to California. In 1940, he moved to the City College of New York. This job turned out to be a disaster because a court found him morally unfit and he was dismissed. The Barnes Foundation in Merion, Pennsylvania offered him a contract, and he took up a position. He found the director, Albert Barnes, difficult to deal with and cut his contract short. In 1944, he returned to the UK and Trinity College.

A History of Western Philosophy was published in 1945, and this brought Bertrand Russell worldwide fame and financial success. Around this time, he was becoming concerned with the threat of nuclear war.

Issues of the day included nuclear disarmament, the Vietnam War and the Suez Crisis. In 1955 Bertrand Russell and Albert Einstein produced the Bertrand Russell-Manifesto which brought attention to the dangers of nuclear war. By 1961, he was involved in the anti-nuclear movement. After a demonstration in London in 1961, he was arrested and spent a week in Brixton Prison.

The Cuban Missile Crisis of 1962 was another event he took an active interest in. Always anti-war, he founded the Russell Vietnam War Crimes Tribunal in the mid-sixties to examine the role of the United States in Vietnam.

When Bertrand Russell's brother died in 1931, he inherited the title and became Bertrand, the 3rd Earl Russell.

Bertrand Russell's Paradox brought him critical attention. He will also be remembered for  A History of A Mathematics (1903). His History of Western Philosophy (1945) has always been popular and has never been out of print since publication.

Bertrand Russell was awarded the Order of Merit in 1949. In 1950 he won the Nobel Prize for Literature. In 1963 he was presented with the Jerusalem Prize.

He suffered from depression for most of his life.

Bertrand Russell was a lifelong pacifist who became active in the anti-nuclear and anti-war movement on the 1960s. He was protesting about the Arab-Israeli conflict in the week before his death at age 90.

After a long, productive life, Bertrand Russell died at his home in Wales on February 2, 1970.

His lasting legacy will be the influential oeuvre he left behind, including Bertrand Russell's Paradox and his A History of Western Philosophy.

Beginning during WWI (1914-1918) Bertrand Russell was a pacifist and provoked authorities into jailing him. He lost his position at Trinity College in 1916 due to his pacifism and anti-war activities. His stint at New York College came to a premature end because of a court ruling him morally unfit to teach. Later, in old age, he was arrested in 1961 for marching in an anti-nuclear demonstration in London. He was jailed for a week.