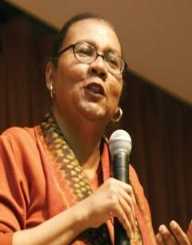 Bell Hooks was born on September 25, 1952. She is an American author. She is also a feminist and social activist. Bell Hook is just her pen name since her real name is Gloria Jean Watkins.

She adopted the name from her maternal grandmother. Her writings are unique because she mostly rights about the intersectionality of race, gender, and capitalism. She has published more than thirty books and several scholarly articles.

She has also participated in public lectures and appeared in documentaries. In 2014, she established the Bell Hooks Institute at Berea College in Kentucky. She is currently sixty-five years old.

After graduation, she taught in different institutions and wrote at the same time. In 1983, she finished her doctorate in literature at the University of California in Santa Cruz. She completed her doctorate with a dissertation on Toni Morrison, the author.

In 1976, Bell Hooks was appointed as an English professor and senior lecturer in Ethnic Studies at the University of Southern California. She taught at the school for three years. In 1978, her first book of poems titled ‘And There We Wept’ was published by Golemics using her pen name Bell Hooks. This name she adopted from her great maternal grandmother.

In the 1980s and 1990s, she taught in institutions such as University of California, Yale University, Oberlin College, San Francisco State University and City College of New York among others.

In 1981, her first significant work ‘Ain’t I a Woman? Black Women and Feminism’ was published by South End Press. In her career, she has published more than thirty books rooted in the topics of black men, patriarchy, sexuality, feminism, and capitalism among other sensitive issues.

Some of the positions Bell Hooks has held include professor at the African American Studies and English at Yale University, she was an associate professor of Women’s Studies and American Literature at Oberlin College in Ohio, and she was a Distinguished Lecturer of English Literature at the City College of New York.

In 2002, she had the privilege of giving a commencement speech at the South Western University. In 2004, she became a Distinguished Professor in Residence at the Berea College in Kentucky. In 2008, she released her book ‘Belongings: A Culture of Place’. Some of the books that she has written include ‘Talking Back: Thinking Feminist, Thinking Black’, ‘Yearning: Race, Gender and Cultural Politics,’ ‘Black Looks Race and Representation,’ ‘Sisters of the Yam: Black Woman and Self-Recovery’ and ‘Outlaw Culture: Resisting Representations’ among so many others.

Bell Hooks is not married. She is currently sixty-five years old.