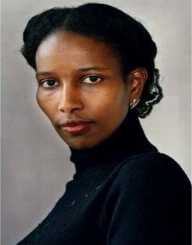 Ayaan Hirsi Ali is a Dutch-American politician, activist, and author born in Somalia. Vying on the ticket of the People’s Party for Freedom and Democracy, Ayaan Hirsi Ali was elected the House of Representatives oin2003. However, issues concerning her Dutch citizenship came up which forced her to resign her position in 2006. As an activist, he has a strong view on the Islamic religion and believes it is high time some reforms were made in that religion.

Ayaan Hirsi Ali sees some doctrine of Islam as outmoded especially on the way women are treated. According to Hirsi, Islam is an enemy and needs to be wiped out to achieve world peace. This stands led to her collaboration with Theo van Gosh in the film Submission which is based on the oppression women undergo in Islam in 2004. This film was met with fierce criticisms and death threat that eventually led to the assassination of Van Gosh by Mohammed Bouyerion November 2, 2004. Nonetheless, Ayaan Hirsi Ali  released the book Heretic in 2015, in which she still advocates for a reform in Islam. Hirsi is also a critic of female genital mutilation. She is the founder of AHA Foundation which is into women right activism. Hirsi has gained several honours for her works.

Ayaan Hirsi Ali  was born on November 13, 1969, in Mogadishu, Somalia to father Hirsi Magan Isse. Shortly after Horsi’s birth, his father was imprisoned due to his association with the Somali Salvation Democratic Front and involvement in the Somalia Revolution. Though her father had strong objections to female genital mutilation, Hirsi underwent the procedureupon the request of her grandmother. Her father was in prison then. Her dad was, however, able to escape from prison and moved the family to Saudi Arabia in 1977, then settled in Nairobi, Kenya in 1980 after a short stay in Ethiopia. There, Ayaan Hirsi Ali  attended the Muslim Girls’ Secondary School and later enrolled at the Valley Secretarial College in Nairobi for a secretarial course.


Asylum In The Netherlands

At age 23, Ayaan Hirsi Ali  after some visits to Dusseldorf and Bonn made her way to the Netherland to avoid an alleged early marriage arrangement by her family. There, Ayaan Hirsi Ali  was given a residence permit in four weeks after seeking for political asylum.

Ayaan Hirsi Ali  started picking short term jobs like sorting of post and cleaning and later served as a translator Rotterdam refuge centre. With her interest in education, she enrolled at the De Horst Institute for Social Works in Dirbergen to take a course in social work and later at the Leiden University where Ayaan Hirsi Ali  graduated in 2000 with an MSc degree in political science.

Ayaan Hirsi Ali's  main motive of pursuing a course in social works and subsequent political science was due to her interest in how the Dutch systems work and wanted to be part of it. Soon after graduating from the university she joined the scientific institute Wiardi Beckman Foundation which had links to the center-left Labour Party. Despite her intense association with Islam since childhood,  Ayaan Hirsi Ali  had as of the 11 September 2001 attack on the United States of America by the al-Qaeda, started to have some disaffection for the religion especially after when Osama Bin Laden defended the act with the Quran. This was when the onetime Islam bias Hirsi started to regard the Quran as just and historical and by extension an ordinary book.

Ayaan Hirsi Ali  totally gave up religion after reading the Atheistisch manifest and subsequently renounced Islam and her belief in a God in 2002. Ayaan Hirsi Ali  has since published several workscriticising Islam and its culture and this posture has since come with a lot of death threats. With disaffection with the Labour Party, Ayaan Hirsi Ali  switched camp to join the center-right party People’s Party for Freedom and Democracy (VVD) after having some series of meeting members like Gerrit Zalm and Neelie-Smit Kroes.

Ayaan Hirsi Ali  will later become a House of Representatives member on the ticket of the party in 2003. But in 2006, controversies aroused from her of her lying to the Dutch Immigration when seeking for her asylum. It was discovered that Ayaan Hirsi Ali  had lied on her claims that she was fleeing war in Somalia; also Ayaan Hirsi Ali  lied about her age and name and her account of also escaping forced marriage was also framed which she later admitted to. Instead, it was revealed she lived a comfortable life with her family in Kenya at the time she left for the Netherland.

In her bid to serve the interest of USwomen from political Islam and its associated tribal customs which is frowned by the U.S and international laws, Hirsi Ali founded the AHA Foundation. Ayaan Hirsi Ali  has actively used her foundation to advocate against forced marriage, female genital mutilation, denial of girl child education and honour of violence and through which are based on the misconceptions religious ideologies and freedom of speech in the US and Europe.

Ayaan Hirsi Ali  has several awards including Prize of Liberty in 2004, Freedom Prize of Denmark from the Liberty Party in 2004, Harriet Freezerring Emancipation Prize in 2005, European Bellwether Prize in 2005, Democracy Prize of the Swedish from the Liberal People’s Party in 2005, Tolerance Prize in 2005, Emperor Has No Clothes award in from the Freedom From Religion Foundation in 2010 and Lantos Human Right Prize for fearless leaders, reformers and rebels who have been willing to defy social and cultural norms to speak out against human rights abuses in 2015.