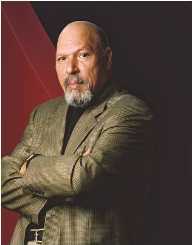 African-American playwright and author August Wilson was born Frederick August Kittle, Jr. 27 April 1945 in the Hill District of Pittsburgh, Pennsylvania in 1945. He was one of seven children born to Daisy Wilson. His biological father was Frederick Kittel, a German immigrant, a baker, who contributed little to his upbringing. When his biological father died in 1965, Wilson took on his mother’s surname. His stepfather was David Bedford who killed a man in a robbery and spent 23 years in prison before dying in 1969.

August Wilson was a pupil at a private school, Central Catholic High but left because of bullying. He then enrolled at Connelly Trade School before transferring to Gladstone High School. In 1960, he dropped out of high school and educated himself by spending school hours in Carnegie Library where he developed an interest in literature and writing.

After dropping out of school, August Wilson did a series of menial jobs before joining the U.S. Army (1962). He spent a year in the army before returning to Pittsburgh and finding what work he could to support himself. In 1968, he co-founded the Black Horizon Theatre with Claude Purdy and Rob Penny. His first play, The Homecoming, was staged at the Kuntu Repertory Theatre in 1976. The following year, he wrote a musical play, Black Bart and the Sacred Hills.

He left Pittsburgh and relocated to St Paul, Minnesota in 1978 where he found work as a writer at the St Paul Science Museum. In 1980, he was granted a fellowship by the Minneapolis Playwrights Centre. His play, Jitney, directed by Bob Johnson, was staged at the Pittsburgh’s Allegheny Repertory Theatre in 1982. The same year, the National Playwriters Conference at the O’Neill Theater Centre in Connecticut accepted Ma Rainey’s Black Bottom.

August Wilson met the African-American director Lloyd Richards, who was the Dean of the Yale University School of Drama as well as the Artistic Director of the Yale Repertory Theatre at the conference. Richards took an interest in Wilson’s writing and subsequently became his mentor. Lloyd went on to direct the first six of Wilson’s plays staged on Broadway.

In 1984, August Wilson's play Ma Rainey’s Black Bottom was staged at the Yale Repertory. The production went on to Broadway and won a New York Drama Critics Circle Award. Fences, a play about an African-American baseball player premiered at the Yale Repertory in 1985 and 1986; Joe Turner’s Come and Gone also premiered at the theatre. Fences was staged on Broadway in 1987 and won Wilson the Pulitzer Prize. Other plays include Joe Turner’s Come and Gone (1988), The Piano Lesson (1990), Two Trains Running (1992), Seven Guitars (1996), King Hedley (1999) and Gem of the Ocean (2002).

In a 2003 revival of Ma Rainey’s Black Bottom on Broadway in 2003, American actress Whoopi Goldberg played the role of Ma Rainey. August Wilson's last play was Radio Gold which premiered at the Yale Repertory Theatre in 2005.

Other prizes include the Whiting Award for Drama (1986), the Pulitzer Prize for Drama: Fences (1987), a Tony Award for Best Play: Fences (1987) and a Pulitzer Prize for Drama for The Piano Lesson (1990). He was inducted into the Black Filmmakers Hall of Fame (1991), presented with a National Humanities Medal (1999), inducted into the American Theatre Hall of Fame (2006).

August Wilson's childhood home at 1727 Bedford Avenue, Pittsburgh is was designated a historic landmark in May 2007 and is on the National Register of Historic Places. There is also an August Wilson Park in the neighbourhood. Pittsburgh has also honoured the playwright by the naming of the August Wilson Center for African American Culture. The Virginia Theatre on Broadway was renamed the August Wilson Theatre after his death in 2005.

Wilson moved to Seattle in 1990 and his second child, Azula Wilson was born there in 1997. In June 2005. Wilson was diagnosed with liver cancer. He died on the 2 October 2005 in Seattle, Washington.