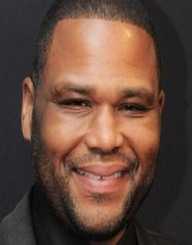 Anthony Anderson is an American Actor, Comedian, and a Writer.

Anthony Anderson was born on August 15, 1970, at Compton. His mother, Doris was a telephone operator and his step-father Sterling Bowman, was a native of Arkansas.  His father worked in a steel mill before he started his own business.

Anderson studied in Hollywood High School and Howard University. In 1993 he graduated with a degree in theatre arts.

Anthony Anderson's first attempt to become a comedian was a failure. He met his friend and actor Guy Torry. Torry consoled Anderson and encouraged him to continue acting on the stage.

Anthony Anderson started making guest appearances on television in several programmes. He starred in the Saturday morning television programme, Hang Time.  In later years Anderson and Guy Torry acted together in the film “Life” along with Eddie Murphy and Martin Lawrence.

In 2008, Anderson played the role of Detective Kevin Bernard in the crime drama, Law and Order. Anderson acts and writes for ABC series, Blackish along with Fishburne and Tracee Ellis Ross and Tracee Ross televised on Wednesday nights.

Anthony Anderson was nominated for a Prime-Time Emmy Award to outstanding lead actor in a comedy series. He had a lead role in television series Hang Time. He had roles in major series, NYPD Blue, Malcolm, and Eddie, In the House and Ally McBeal.

In a series, All About Anderson, he had prominent roles.

Anderson joined the NBC crime drama television series, Law and Order in 2008. He had earlier acted in two crime series. Fox’s K-Ville and Fx’s The Shield. His series “Eating America” was a 2014 summer show.  He had to visit many places in America to observe “Food Festivals.” He is a regular judge on Iron Chef America.

In 2013, he signed for the family game show, “Wall of Fame “produced by Endemol USA for NBC.  The series was never aired.

Anthony Anderson's debut as a film actor was in the film, “Liberty Heights”. He has been acting as a comedian for many years in feature films such as “Kangaroo Jack”, My Baby’s Daddy, Hustle and Flow etc.

Anderson acted in a film, ‘The Departed’ which won the Academy Award. He had a small role in the film, ‘Scream4.’

In 2009, Anthony Anderson directed a short film featuring his earlier co-star, Jeremy Sisto for NBC and Liberty Mutual Group and aired on Oct.2009.

He played for Alzheimer’s Association in 2011, on Who Wants to be a Millionaire and won a prize

He has been active in awareness campaigns on diabetes.

Anderson played a role in Black-ish, about a middle-class African-American family. In 2012, he played the role as Gary, in” Guys with Kids’’.

He is a guest panelist for several game shows over many years.

In 2016, Anthony Anderson was nominated for a Golden Globe nomination for his best acting in television series.

He has several awards (12) to his credit, such as