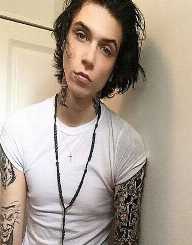 The flux of youngsters in Hollywood and American Music industry these days is not far from the confirmation that the present generation is ready to make the break needed. The popularity of Justin Timberlake has brought many youngsters into the music industry. Andy Biersack is not an exception. His good look, as well as his skills, made him more famous among people.

In recent time, he became a household name as well as being famous for being a pianist and singer. He was the lead singer for a band, Black Veil Brides which he founded. He adopted the name Andy Black as part of his claim to fame and later forwarded a genre of music along the line of bands like Motley Crue and Kiss. His known to have gone from strength to strength gaining more fame upon fame.

Andy Biersack was born to a conservative family in Cincinnati, Ohio. He was known to have been brought in a traditional American way and schooled at a Catholic elementary school. He was known to have been very keen on music at a very tender age before he chose to join bands like Damned and the Misfits. Andy was always bullied in school by the elder kids in his school is the fact that he had a different taste of music compared to them. However, he stood his ground irrespective of the persecution. He eventually put that up in one of his popular movies through a way of analogy. Andy Biersack soon completed his training in music at the School for Creative and Performing Arts, Cincinnati. It was this school that shaped his destiny and made him advance more in his career before he got launched into stardom.

Andy Biersack has always wished to start his band right from the outset. He, however, formed a group sooner with some of his friends. He named the group, Biersack and it later metamorphosed to Black Veil Brides. In 2009, the band signed with a record label and they released their first video Knives and pens. This was about his bully back then in secondary school. The video was highly successful, and they pushed up in releasing a top charting album, we stitch these wounds. The album was successful commercially, and they sold over 13, 000 copies. They had released two more album between 2011 and 2013 before another was released in 2014. It was there that many people took notice of the band. Around that period, Biersack chose to start his solo career and named it Andy Black.


WHY IS ANDY BIERSACK SO SPECIAL?

Andy Biersack stood out from others because he chose to go down another lane of the genre of music which is way different from the synth and goth music his band played. The new initiative was meant to be a complement to his performance with the group and not to be an exist.  Around May, he released a single, They Don’t Need to Understand, and this was later followed by a new single album in 2016. Apart from the whole music thing, he chose to venture into commercials. He did commercials for AT&T as well as Montana Meth. He starred in a web series, Funny or Die before he starred in Legion of the Black which supported the band’s third album.

WHAT MAKES UP ANDY BIERSACK?

Andy Biersack was raised in a conservative and highly religious family who teaches him to follow their ways of life. This has however amplified his view about God over the years. His marriage to his current wife, Juliet Simms was around April 2016. Andy Biersack also gave information that he did sustain injuries during his recent performances. While performing in Hollywood, he fell from a 15-foot stage sustaining injuries, and it took time before he could become very normal.

Also, Andy Biersack had serious injuries which were gotten from an accident when he was coming from a performance in 2011. It should be noted that the success of his band was the bedrock for the launch of his career. Apart from this, his variant genre has appealed to many audiences around the nation and has become very popular among the youth. If he doesn’t relent and the enabling environment is there, he will go places in years to come. Apart from this, his acting career also helped in pushing him forward regarding success and the like. His troupe is expected to make more records sales as they have made some of it in the past. Andy Black is here to stay, and he is the new phenomenon when it comes to rock music.