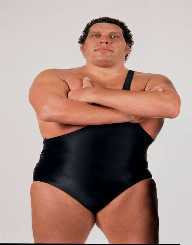 André René Roussimoff known in the entertainment industry as Andre the Giant was a French actor and professional wrestler. Born on May 19, 1946, he was famous for his fight with Hulk Hogan before the end of the WrestlemaniaIII. During his wrestling career, André became a one-time Champion of the World Wrestling Federation (WWF) now known as the World Wrestling Entertainment (WWE). He was also a one-time WWF Tag Team Champion.

In acting, Andre the Giant was best known for his role in The Princess Bride as Fezzik, the giant. The film earned him several followers. André developed the condition known as acromegaly, which is an excess hormone growth in the body leading to gigantic. It was first detected during his wrestling career in Japan. André was affectionately known as “The Eighth Wonder of the World.”André was inducted into the WWE Hall of Fame class of 1993 as the sole inductee for that year.

André René Roussimoff was born on May 19, 1946, in Moliens to Boris and Mariann Roussimoff. André showed signs of gigantism at a very young age. At age 12, he was 191 cm (6 ft. 3 inches) and weighed 94 kg. Even though he was an excellent student, he dropped out of school after eighth grade and did not have a high school education. His only reason was that education was not crucial for a farm worker. He since worked on his father’s farm doing the work of three workers on the go according to an account by his brother Jacque. He also did an apprenticeship in woodworking and later worked in an engine-manufacturing factory.

Andre the Giant had no satisfaction in the factory work hence left for Paris at age 17. In Paris, he was identified by a promoter who will teach him professional wrestling. As he trained towards his a career wrestling, André also worked as a mover to pay his bills. He started his wrestling career billed as"Géant Ferré". In 1966, André’ met Canadian promoter and wrestler Frank Valois, who later became his manager and adviser. With time, he became popular in wrestling in countries like Australia, United Kingdom, New Zealand, and Germany.

In 1970, Andre the Giant made a debut in Japan for the International Wrestling Enterprise billed as "Monster Roussimoff". While there, he wrestled in singles and tag-team competitions becoming the tag-team champion alongside Michael Nador. After a successful career in Japan, he left for Montreal, Canada and was an instant success there. His gigantic nature made him very attractive and always sold out gate ticket. With time, promoters could not find a forceful opponent for him and this affected gate proceeds.

Andre the Giant made a WWWF debut on March 26, 1973, by defeating Buddy Wolfe in the New York Madison Square Garden. Throughout the 1970s to the early part of 1980’s he became one of the professional wrestling most beloved “babyface.”André engaged in an unscripted boxer vs. wrestler fight with professional boxer Chuck Wepner in 1976. He won the fight by a count out.

André René Roussimoff is best remembered for his several feuds with Hulk Hogan especially at the Wrestlemania III in 1987. Their feuds started in the 1980s, with the Showdown at Shea at the Shea Stadium becoming one of their popular matches. Hogan was able to slam André to become victorious in that match. Other popular feuds include a match between him and Killer Khan, the "Mongolian Giant."In 1988, André won his first WWF World Heavyweight Championship in a fight with Hogan. André also had several other rivalry matches.

Andre the Giant spent his later career in the All Japan Pro Wrestling (AJPW) and Universal Wrestling Association billed as"André el Gigante." From 1990 to 1992 her toured with the AJPW three times a year. Giant Baba was his usual teammate during tag-team matches. He retired from professional wrestling in 1992. He made a cameo in the comedy film Trading Mom, released a year after he died.

Andre the Giant made an acting debut in 1967 in the French boxing film Casse tête chinois pour le judoka. In 1976 he made a US film debut in the television series The Six Million Dollar Man, playing as Bigfoot. He starred in films like Conan the Destroyer as Dagoth a horned giant god, Micki & Maude and I Like to Hurt People (1985). His famous role was in The Princess Bride in 1987 playing as Fezzik. Andre the Giant also appeared in television shows like B.J and the Bear, Zorro, The Greatest American Hero and the Fall Guy.

Andre the Giant was the sole inducteeinto the WWE Hall of Fame class of 1993 during its inaugurations.

André René Roussimoff entered the Guinness Book of Record of World Records in 1974 as the highest-paid wrestler in history. He was earning the US $400,000 annually during the 1970’s. André was unofficially known as the greatest drunk on earth due to his excessive drinking habit. On January 27, 1993, André was found dead in his hotel room in Paris from a suspected congestive heart failure. He was in Paris for his father’s funeral. According to his final will, André was cremated and "disposed of". His remains were flown to the United States for the cremation to take place as ashes scattered at his ranch in Ellerbe, North Carolina. He willed all his estate to his daughter Robin.