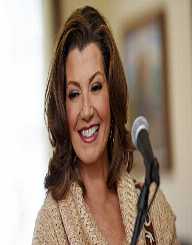 Credited for revolutionizing the contemporary Christian music during the late 20th century and making a successful crossover to pop music with the creation of  different fusion music albums blending gospel and pop music optimally, American singer, musician, author, media personality and songwriter Amy Lee Grant was born on November 25, 1960, in Augusta, Georgia, United States of America. She was the youngest of the four daughters born to her parents, father Burton Paine Grant and mother, Gloria Grant.

Her family lived in Nashville, Tennessee and she grew up there along with her three older sisters in an environment of togetherness and religious fervor. Their usual visit to the neighborhood church propelled her attachment for Christian stories, hymns, and songs, inspiring her to a great extent in her later work. She attended the Harpeth Hall School, an all-girls school in Nashville.

Amy Lee Grant performed a song written by her for the first time in a public platform at a school function. She learned to play guitar during her teenage school days and was also working part-time at a recording studio. She made a demo tape of her song for her parents with the help of the church youth-leader Brown Bannister. Chris Christian, the owner of the recording studio, heard the tape while Bannister was making a copy of the tape.

Amy Lee Grant recorded her first self-titled album in 1977. The album was eventually released in early 1978. She appeared for her high school graduation examination one month after the release of her first album ‘Amy Grant’.

The album created a sort of ripples in the world of Christian music. In one hand, her songs reflected spiritualism projecting Christian teachings, and in the other hand, she created an entirely new, invigorating sound akin to rock music, first time heard by the followers of Christian music.

In 1978, Amy Lee Grant began studying at the Furman University situated in Travelers Rest, South Carolina. She performed at a concert for the first time during her first year at the university, where the entry fee was collected through the sale of tickets. Her second album ‘My Father’s Eyes’ was released in 1979 and in the ensuing album release party in May 1979 she happened to meet her first husband, Gary Chapman, who wrote the title track of the album. She then toured with Chapman during the mid-1979.

She transferred to the Vanderbilt University in her hometown of Nashville, Tennessee the following year only to eventually drop out to focus fully on her nascent music career.

She released her third album ‘Never Alone’ in 1980 and followed it with two live albums in 1981, ‘In Concert’ and ‘In Concert Volume Two.’ She developed her signature trademark of performing barefoot while participating in these early shows of her career.

In 1982, Amy Lee Grant released first of her breakthrough album ‘Age to Age,’ earning her a Grammy Award for Best Gospel Performance among an overwhelming flow of critical acclaim. Gospel Music Association (GMA) bestowed her ‘Performer of the Year’ Award among many other Dove Awards including ‘Gospel Artist of the Year’ and ‘Pop/Contemporary Album of the Year.’ In 1983, ‘Age to Age’ became the first Christian album by a solo artist.

The album also went platinum in 1985 on the same count. Her 1984 pop-oriented Christian album ‘Straight Ahead’ was a step forward in the direction of her fusion songs building a bridge between contemporary Christian and pop music.

Amy Lee Grant released her album ‘Unguarded’ in 1985. The texture and sound of this album veered towards mainstream pop music whereas her previous albums had a softer rock element in its sound. She began blending gospel and pop music in her upcoming albums and made a successful crossover with the track ‘Find a Way,’ which for the first time hit the Billboard Top 40 in spite of being a non-Christmas Christian song.

The song also reached No. 7 on the Adult Contemporary Chart. Grant successfully made it to the top when in 1986 her song ‘The Next Time I Fall’ climbed the ladder and for the first time reached the No.1 position on the Billboard Charts.

The song was a duet sung by Grant and former Chicago singer/bassist Peter Cetera. She recorded another duet titled ‘I Could Never Say Goodbye’ along with singer Randy Stonehill for her ‘Love Beyond Reason’ album.

Her 1988 album ‘Lead Me On’ comprised of many songs about Christianity and love relationships. The album was declared as the greatest Contemporary Christian album of all time by CCM Magazine which dealt with contemporary Christian music. She completed the crossover process with the release of her 1991 album ‘Heart in Motion’.

One of its song ‘Baby, Baby’ topped the Billboard pop chart. People admired the album and found it very much like pop music. However, skeptics criticized her for deserting her gospel roots for cheap stardom.

Amy Lee Grant continued her effort of creating a common chord between traditional Christian music and the contemporary pop music culture of the 1980s and 1990s. She recorded numerous songs and albums in the process and won the heart of music lovers of the world.

Amy Lee Grant earned a total of 6 Grammy Awards and more than 20 GMA Dove Awards during her long and illustrious career. Her most recent Grammy Award was for her 2005 creation: ‘Best Southern, Country, or Bluegrass Gospel Album’ – ‘Rock of Ages...Hymns & Faith’.

Amy Lee Grant tied the nuptial knot for the first time with her fellow Christian musician Gary Chapman. The marriage was solemnized on June 19, 1982. The couple together has three children. Grant divorced Chapman 17 years later in 1999 citing irreconcilable differences.

On March 10, 2000, Amy Lee Grant got hitched for the second time by marrying country singer-songwriter, Vince Gill. The couple was blessed with a daughter on March 12, 2001.