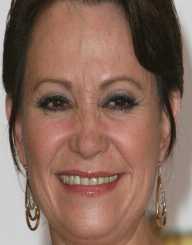 Adriana Barraza was born on the 5 March 1956 in México. Her mother died when she was a child, and she has four siblings: a sister and three brothers.

Adriana Barraza began her career by working as a  theatre director in México City.

She has had a long career in television and theatre, working as a director as well as acting. Films she has appeared in include Babel (2006), Here, Drag Me to Hell (2009),  Thor (2011) and Cake (2014).  She also appeared on the television show The Strain. Besides her acting and directing, Adriana Barraza is also an acting coach and works linguistically with actors to perfect various accents.

In 1975 she gave birth to her daughter Carolina. She was married to Carlos Valsagna from 1978 until their divorce in 1985, during their marriage Valsagna adopted Carolina. In 2005, Barraza married Arnaldo Pipke.