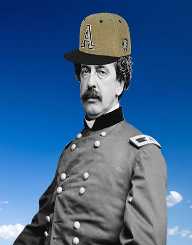 Abner Doubleday was a United States Army officer and Union general during the American Civil War. Born on June 26, 1819, he was the first officer to fire a shot in defence of Fort Sumter, during the opening of the war. He played a vital role during the initial stage of the Battle of Gettysburg. However, he was later redrawn from action by Major General George G. Meade, an incident that would cause a lifetime animosity between them.

After the war, Abner Doubleday lived in San Francisco where he patented a cable car railway. In 1908, the Mills Commission declared him as the inventor of the game of baseball, a claim many baseball historians have debunked. He had never claimed to be the inventor of the game during his lifetime. He was a member and later served as the president of the Theosophical Society while in New Jersey.

Abner Doubleday was born on June 26, 1819, in Ballston Spa, New York to Hester Donnelly and Ulysses F. Doubleday. His father was a representative of Auburn, New York in the United States Congress, a publisher of newspapers and books, and fought in the War of 1812. His paternal grandfather, Abner Doubleday fought in the American Revolutionary War while his maternal grandfather Thomas Donnelly also served in the army as a mounted messenger for George Washington.

Abner Doubleday was very short as a child and grew up in Auburn. He later moved to Cooperstown, where he lived with his uncle. While there, he received education from a private preparatory high school. After graduating, he worked for two years as a surveyor and civil engineer. He then continued his education by enrolling at the United States Military Academy in 1838. He graduated in 1842 at age 21 and commissioned a brevet second lieutenant in the 3rd US Artillery.

After his graduation, Abner Doubleday first served in the coastal garrison and later as an artillery officer during the Mexican-American war from 1846 to 1848. From 1856 to 1858, he fought in the Seminole Wars in Florida. In 1858, he received a transfer to Fort Moultrie in Charleston Harbour, where he served under Colonel John L. Gardner. He rose to the rank of captainprior captain before Civil War and was the second in command in the garrison at Fort Sumter, serving under Major Robert Anderson. On April 12, 1861, he commanded the first return shot by the Unions in response to the Confederates during the Civil War. On May 14, 1861, he was promoted to major and from June to August that year, commanded the Artillery Department in the Shenandoah Valley.

Abner Doubleday commanded the artillery of the Army of the Potomac led by Major General Nathaniel Banks. On February 3, 1862, he was appointed brigadier general of volunteers after which he was assigned to northern Virginia where the Army of the Potomac was embarking on the Peninsula Campaign by the. He led the Army of Virginia’s 2nd Brigade, 1st Division, III Corps for his first combat assignment during the Northern Virginia Campaign. He fought in the Second Battle of Bull Run. After the battle at Antietam where he was wounded by an artillery shell explosion, he was promoted to lieutenant colonel in the regular army and later to major general of volunteers in March 1863.

On July 1, 1863, during the start of the Battle of Gettysburg, Abner Doubleday was second in command of the second infantry division that was a reinforcement to the cavalry division led by Brigadier John Bufford.  He became the commander of the division after the commander John F. Reynold died in battle. He led the corps in a fierce fight against the Confederates brigades, which outnumbered his division by almost twice. His front however broke and the corps disassembled with active members joining other corps.

The “worse and humiliated” moment of his entire life happened on July 2, 1863, when the commander of Army of the Potomac Major General George G. Meade, replaced Abner Doubleday with a junior officer Major General John Newton.This caused a lifetime enmity between Doubleday and Meade. On the second day of battle, he was wounded in the neck after a fearless fight. He, therefore, earned abrevet promotion to colonel in the regular army. After Meade refused to reinstate him as commander of Corp I, he left Gettysburg for Washington on July 7, 1863. He retired from the army in 1873.

Abner Doubleday is the perceived inventor of Baseball according to the Mills Commission, chaired by Abraham G. Mills who was the fourth president of the National League. The commission had been appointed in 1905 to determine the origin of baseball. It concluded in its final report on December 30, 1907, that "the first scheme for playing baseball, according to the best evidence obtainable to date, was devised by Abner Doubleday at Cooperstown, New York, in 1839." "In the years to come, in the view of the hundreds of thousands of people who are devoted to baseball, and the millions who will be, Abner Doubleday's fame will rest evenly, if not quite as much, upon the fact that he was its inventor ... as upon his brilliant and distinguished career as an officer in the Federal Army."

This claim has however been challenged by several baseball historians. Abner Doubleday never associated himself with baseball nor claimed to have contributed to its development in his entire life.

Abner Doubleday married Mary Hewitt of Baltimore in 1852. He died of a heart disease on January 26, 1893. He was interred in Arlington National Cemetery in Arlington, Virginia after his body had been laid in state in New York’s City Hall.