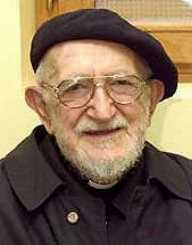 A distinguished French humanitarian, Catholic Priest Abbe Pierre devoted his life serving for the destitute, homeless people and the refugees. A Messiah of the homeless people, he founded the Emmaus movement in 1949 to help the cause of the underprivileged, deprived section of the society, particularly, the displaced and the abandoned people. He has repeatedly been voted as the most popular man of France. He is also regarded as a major character and a symbol of French Resistance during the World War II.

Abbe Pierre was born as Henri Marie Joseph Grouès on August 5, 1912, in Lyon, France in a prosperous and devout Catholic family. His father was a prominent silk trader. Henri was the fifth of the eight children of his father. From a very young age, he started accompanying his father to an Order circle, the brotherhood of the “Hospitaliers veilleurs," where he observed how the predominantly middle-class members of the Order are serving the poor and realized the significance of such humanitarian service.

Abbe Pierre became a member of the Scouts de France and was nicknamed "Meditative Beaver" (Castor méditatif). As he was inclined to follow a spiritual life from an early age, in 1928, at the age of 16, he tried to join a Monastic order. However, he had to wait for another one and half years before being allowed to accomplish his aspiration as he was considered too young at that age. He joined the Capuchin Order finally in 1931. It was the main subsidiary of the Franciscan monastery of Notre Dame du Bon Secours at St. Etienne. He relinquished all his wealth and inheritances and donated all his materialistic possessions to charities.

Abbe Pierre was renamed as Brother Philippe and entered the monastery of Crest in 1932. He stayed there for seven years. A severe lung infection compelled him to leave the monastery in 1939 as it was challenging to cope with the disciplined, strict, hard and austere monastic life with impaired health.

After having left the monastery, Abbe Pierre joined a hospital in La Mure as a Chaplain. Afterwards, he joined an orphanage in the Côte-Saint-André. On 24 August 1938, he was ordained a Roman Catholic priest. In April 1939, he was appointed as the curate of Grenoble's Cathedral. World War II broke out shortly afterwards, and he was recruited as a non-commissioned officer in the train transport corps. During his training in Alsace, he was diagnosed with pleurisy and fell ill.

Abbe Pierre actively involved himself in the French Resistance during the onslaught of the World War II, operating and writing under several different pseudonyms. In 1943, he used to write for the clandestine newspaper ‘Union patriotique indépendante’ under the pseudonym Georges. Working under a pseudonym was necessary to hide his identity from the Gestapo. He was also known for his vehement opposition to the Nazi forced-labor program of Service du travail obligatoire (STO), where people were forcibly taken for work.

Abbe Pierre assisted people with all his might to avoid being taken into the STO and established a refugee camp in Grenoble for such people who resisted the STO. The Nazis were enraged with the involvement of Abbe in the French Resistance and the activities he was associated with. He was arrested in 1944 but was released very soon. He escaped to Spain and then to Gibraltar. Finally, he landed in North Africa where he joined the Free French Forces of General de Gaulle in Algeria. He was soon able to engage himself as a chaplain in the French Navy on the battleship Jean Bart in Casablanca.

After the war got over, Abbe Pierre was elected as a member of France’s national assembly. However, with the passage of time, he became disillusioned with the political parties and realized that he would not be able to achieve anything by remaining in politics. He finally ended his political career in 1951 and went back to his first passion, helping homeless people.

In 1949, Abbe Pierre founded the charitable organization Emmaus. The primary purpose of the organization was to provide shelter to the homeless and give aid to the poverty-stricken people. During the decolonization movement which was gaining ground since the 1950s, he was consulted by many heads of the state and prominent political leaders of various countries.

Jayaprakash Narayan invited him to come to India in 1971. Abbe Pierre accompanied the Ligue des droits de l'homme (Human Rights League), France and came to India to mediate the issues of refugees. Later, Indira Gandhi requested him to give his valuable suggestion regarding the Bangladeshi refugees. Abbe established Emmaus communities in Bangladesh.

Abbé Pierre was awarded the Croix de Guerre 1939-1945 with bronze palms and the Médaille de la Resistance for his contributions during the wartime.

Abbe Pierre was bestowed with the honour of the Balzan Prize for Humanity, Peace and Brotherhood among Peoples in 1991. The recognition was given to him for his persistent and altruistic service to humanity.

He was made Grand Officer of the National Order of Quebec in 1998.

In 2004, Abbe Pierre was conferred the Grand Cross of the Legion of Honor by the French President Jacques Chirac.

Being a Catholic priest, Abbe Pierre never married. He was fortunate enough to survive two severe accidents. There was an emergency plane landing in 1950 and a shipwreck in 1963 involving Abbe. He miraculously escaped unscathed both the times with only minor injuries. Though he was laid low by a lung infection during his youth, he was able to live a long and active life.

Abbe Pierre left for his heavenly abode on January 22, 2007. He was suffering from lung infection and was under treatment in the Val-de-Grâce military hospital in Paris. He was 94 at the time of his death. His final rites were performed at the Cathedral of Notre Dame de Paris on 26 January 2007, in the presence of a distinguished gathering of the French President Jacques Chirac, Prime Minister Dominique de Villepin and former president Valéry Giscard d'Estaing.