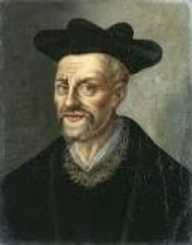 François Rabelais was a French physician, poet, and writer who rose to fame when he published Gargantua and Pantagruel: a four-novel series that tells the story of a father and son duo’s adventures in life.

Much of Rabelais' life is uncertain though there are records that indicate certain information about his origins. He was believed to be born sometime between 1483 and 1494 in Chinon as the son of a wealthy lawyer and landowner in the province of Touraine named Antoine Rabelais.

He entered the seminary and became a novice at a young age at the Franciscan Order. Afterward, he became a friar in Poitou at the Fontenay-le-Comte where he studied the law, science, philology, Latin, and Greek.

During this time, he was starting to gain popularity and was even known to the French scholar Guillaume Budé. At the time, studying Greek was frowned upon and because of his studies, he was pestered a lot for this. As a result, he had to petition Pope Clement VII to leave the Franciscan order and transfer to a different order. The pope obliged and he was transferred to the Benedictine order where he was welcomed with gusto.

Shortly after his transfer, he left the Benedictine order to pursue medicine and enrolled at the University of Montpellier and the University of Poitiers. He relocated to Lyon in 1532 and 2 years later in 1534 started his practice at the hospital called Hôtel-Dieu de Lyon as a doctor. While working in Lyon, he also worked on the Latin publications for the German bookseller Sebastian Gryphius.

Rabelais was also rumored to father two children from an unknown widow sometime in 1532. The children were named François and Junie and were legitimated in 1540 by Pope Paul IV.

In 1532, Rabelais published the first installment of his most popular work, the Gargantua and Pantagruel series entitled Pantagruel King of the Dipsodes, under the pseudonym Alcofribas Nasier. Compared to the succeeding novels, this novel is shorter and is light-hearted but was unlike what the people have read before. Although satire is a well-known theme in most of his works, he never fails to construct sentences that greatly depict in full details the happenings in the book, and is often inspired by the folklore The book was not only labeled as obscene by the Sorbonne but condemned as well.

Regardless of the backlash, he produced the second installment the following year in 1533 entitled Pantagrueline Prognostication of which served as a parody of astrological predictions, almanacs, and the likes which were popularized in the Renaissance period.

The third book was published in 1546 and like the previous installments, was banned by the Sorbonne. The theme of this book now focuses on whether or not the character Panurge should marry. By the end of the book, they decided to set sail and search for the Oracle of the Divine Bottle.

Honoré de Balzac, who was a French poet and playwright, drew inspiration from his works and produced Les Cent Contes Drolatiques or The Hundred Humorous Tales. He was also known to quote Rabelais throughout his works.

The Université François Rabelais which is located in Tours, France is named after him.