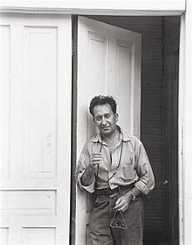 Aaron Siskind was an American editor and photographer as well as a teacher born in 1903. He is best remembered for the innovations he came up with in abstract photography. Sources have it that he was involved in the movement known as the abstract expressionist. He is at times referred to as ‘Father of Modern Photography.’ According to his autobiography; his first shots in his photography career were from a camera given to him as a wedding gift. He took the first shots during his honeymoon. As a child, his favorite subjects were poetry and music. He was the pioneer photographer of the style of merging abstraction and the real world. During his career, he produced documentaries like Harlem Documentary which involved a survey of life in Harlem. He was a great influence on the students he taught during his teaching career.

Aaron Siskind was born on December 4th, 1903 to a family of a Russian Jewish immigrant. His place of birth was in New York City. He was the fifth of the six children of his parents. They were brought up on the Lower East Side of New York City.

Aaron Siskind studied at DeWitt Clinton High School. He then joined the College of the City of New York and studied social science. Upon completing his studies, he received his bachelor’s degree in 1926. After his graduation, he took his first job at New York City Public School in 1926. He was an English teacher at the school for the next 20 years. He quit the job in 1947.

Among the gifts, Aaron Siskind received at his wedding was a camera. He took photos while he was on his honeymoon and that marked the beginning of his great success in photography. He immediately fell in love with photography and decided to pursue it as a career. He would take a snap of anything he came across from footprints, cracked walls among others.

In the 1930s he officially became part of the Photo League of New York. Documentaries were his initial field. Among his first documentaries was Harlem Documentary. He captured photos at Martha's Vineyard in the 1940s. Most of the photos were quite ordinary, but Aaron Siskind had a way of bringing out something extraordinary out of them. He focused mainly on bringing out a clear shape and texture of objects. Between 1943 and 1944 he continued exploring the vineyard but this time he combined real life with abstract photographs. The outcome of it was amazing and was unique from any other photographs ever.

In 1947 Aaron Siskind went back to teaching at Trenton Junior College situated in Trenton in New Jersey. He taught photography till 1949. During his lessons, he would encourage his students always to bring out the best in photographs. In 1950 he had an opportunity to work in the IIT Institute of Design situated in Chicago alongside his friend Harry Callahan. He became a member of the faculty in the institute from 1951 and served till 1971. In 1960 he became one of the editors of Choice Magazine till 1970. For the rest of his career as from 1971, he taught at the Rhode Island School of Design. Meanwhile he is 1973 he also taught photography at Harvard University specifically at the Carpenter Centre.

Aaron Siskind took his last breath on February 8th, 1991 at the age of 87. He died in Providence, Rhode Island after he suffered a stroke.