The chickadee belongs to the titmouse family in the avian world – “tit” meaning “small” and “mouse” meaning “dulled in color”. They are highly adaptable little creatures that spend their lives happily perusing the woodlands and symbolize the happiness and fulfillment we can get from connecting to our natural surroundings.

Chickadees as animal totems are symbolized as cheerful and truthful beings who teach us the art of flexibility and curiosity regardless of size. Although their voices may be small, they have ideas that can make big, positive changes. For us, this serves as a reminder that there are “no small parts, only small actors” when it comes to life. Like the joyful little chickadee, we must be able to voice our impressions, opinions, and emotions to get others to notice us and inspire change. Additionally, this woodland bird is involved with several other symbolic realms of our lives, including protection, defense, bravery, personal identity, and adjustment.


The chickadee spiritual guide is amazing with adjusting and adapting to its environment. Even in the coldest of conditions, it is able to lower its body temperature in order to survive. For us, this ability serves as a reminder that we, too, must be able to adapt to our circumstances, no matter what the conditions may be.


Along with adaptability, the little chickadee animal totem possesses a bravery that one would not immediately assume it is capable of. It seems that they are either unaware of or aren’t bothered by the fact that they are so small and thus vulnerable. In fact, they have been been observed landing in the palm of a human hand. The proximity to others, including potential threats, that they are apparently comfortable with is an intriguing symbol for humans, teaching us to not be so closed off and paranoid of others. Chickadee symbols encourage us to be a bit more trusting and positive regarding social interactions. 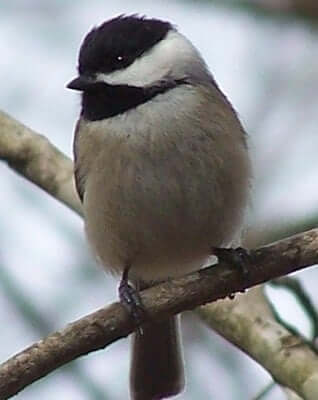 Sociability also retains a symbolic meaning of courage and curiosity for the chickadee. Chickadees are remarkably curious creatures and are unafraid to explore these curiosities.

Being as sharp-witted as they are, they feel that they know what we’re doing – or at least know enough to stay out of harm’s way. In this way, the chickadee is symbolic of having enough courage to seek out new ideas, new perspectives, and new avenues of growth.

Actually, the chickadee spiritual totem is a very affable avian and much of their symbolic meaning deals with being sociable. They travel and migrate in groups, and prefer long-term partners to numerous “flings”. They take solace in the comfort of a close community, which also makes them incredibly protective of their clan. Their bravery shines particularly brightly when larger, more aggressive birds interfere with their families or extended communities.

Chickadees will valiantly and persistently attack the “Goliath”, sacrificing anything and everything in an effort to protect their own. In these situations, they exhibit such fierceness and mercilessness that you would think they were an angry mother bear. This behavior carries strong symbolism that we can learn from.

The chickadee always seems to be the underdog, the “David”, but that does not stop it from giving its all. When you are feeling weak or inferior, you can think of the tiny little chickadee spiritual guide puffing its chest in an angry rant. While you needn’t physically attack anyone (hopefully), you can use this message to fortify, protect, and stand up for yourself when you are experiencing an injustice. They (and you) may be small, but they have a tremendous and brave heart. If the wee chickadee can hold its ground, so can you.

Another important aspect of chickadee symbolism is their signature call. These birds have a very distinct voice that can be recognized by all. This is where their symbolic value of identity comes into play. Chickadees remind us that we, too, must create our own unique voice. We needn’t rely on others to speak for us and should not necessarily conform to someone else’s words and ideas. Each of us has something special and vibrant about us. We need only channel that the way that chickadees do.