Yew Tree meaning signifies the beauty of doing the right thing in life because you will achieve everything you are looking for. Basically, when you plan yourself well, then you will achieve your goals within the right time. Besides, you should keep dreaming of living a better life. Probably, without dreaming then you will lose the momentum of going forward. Actually, dreaming is another type of energy that will keep you moving forward. Notably, short-range goals will give you the confidence to aim for other bigger goals.

Moreover, Yew Tree symbolism implies that success is doing what is required from you. If you want to do well in your life, then you have to follow your instincts. The reason you are in a particular position is that you are good at doing something. Besides, you should keep congratulating yourself for the good work you are doing. Simply you have a better way to become successful. Equally, you need to do something that will add you to other qualities.

Oftentimes, the yew is considered to be one of the most ancient trees in all of the world. Some sources even say that it is the oldest living one. This makes it an incredibly important tree when considering creation and time itself. Appropriately, the yew tree is symbolic of immortality and everlasting life, rebirth, changes, and regeneration after difficult times, and protection – the yew is, after all, quite massive.

The yew tree is also very strong, making it very useful for making bows, spears, and other items. Its physical composition makes it a powerful symbol of vitality, as each of its parts plays a particular role in its cycle. The Yew’s branches grow into the ground so, when the trunk dies, the tree is able to continue living. This also lends support to the yew being a symbol of connection between the past and present, particularly in terms of having a relationship with one’s ancestral heritage. 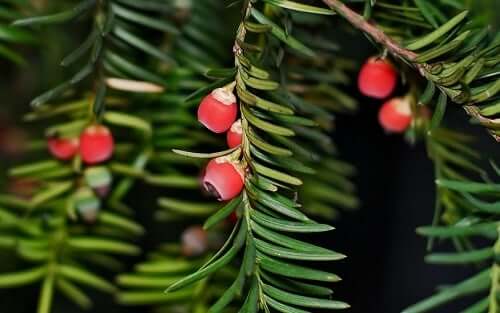 Despite the seemingly wondrous nature and characteristics of the yew, its symbolism can also be rather dark. For example, it is known as the “death tree” in almost all of the European countries, as it is associated with destruction and demise. In fact, the danger that comes with the yew is not just symbolic. The yew is actually very poisonous.

Most parts of the tree are highly toxic (except the red area surrounding the seeds) due to the alkaloid taxine that they contain. This chemical ranges from triggering vivid hallucinations to actually causing death. However, this death is spiritually viewed by some as a true transformation and rebirth into another world. Thus, the yew possesses a unique duality, representing both life and longevity as equally as death.

Curious people as they were, the Celts believed that the most efficient way to get in touch with the wisdom of the gods was through nature. As with other trees and plants, the botany enthusiast Celts held the yew in high symbolic regard, mainly for its strength, audacity, and long life span. They took a special interest in isolated creatures and plants, as they are unique on a grand scale.

Yews stand alone, making them a prime contender for study and focus. Fittingly, they associated the yew with strong attributes such as power, honor, mystery, strength, and leadership. However, Celtic tradition also recognizes the yew as having more mild and affable traits, including silence, illusion, holiness, and introspection. The yew bark holds ages of the tree’s history and character, all concealed behind an aloof and impassive posture. It exudes serenity and inspires deep and insightful thinking in all that encounter it and channel its energy.

Additionally, the Celts noticed other physical aspects of the mighty tree and formed specific conclusions regarding them. For example, yews are quite twisty trees, filled with many dark crevices and suggestive nooks and crannies. In combination with its solitude, this feature of their presentation omits the vibes of an otherworldly presence. Solitary creatures and plants are typically conjoined with the ideas of acumen, knowledge, and magic, making them oracles of mystery and higher understanding.

What does Yew Tree Symbol Mean?

As previously discussed, yews live long and thus symbolize longevity for the humans observing them. For Celts, who made their weaponry from this tree, this meant that the same energy associated with the tree would be transferred over to the warrior bearing its bark. If a soldier had shields and weapons made from yew, it was thought to ensure victory on the battlefield and long and happy life.

Various weaponry were not the only things made from the strong bark and branches of the yew. Posts, rods, and other tools used in both building and spiritual ceremonies were made from this tree in order to extract the tenacious energy from its core. This energy would infuse the atmosphere of ceremonies, allowing the “other world” and its inhabitants to speak to people in this world.

What’s most curious about the Celts’ relationship with this tree, though, is the paradox between their reverence of it and its own lethal values. The people, especially those who studied it closely, surely knew of the dangers of the tree, yet they still valued its longevity and relation to transformation through death. Regardless of the hazards, the yew posed, its positive attributes still made it one of the most sacred natural beings in the eyes of the Celts.

When you manage your behavior well then, you will become like a Yew Tree. The beauty will be seen in you. In other words, you will get the attraction to every good thing in your life. Besides, your character shows how strong you are. More so, your character will take you to the position you want. Perhaps, your goals will play a bigger role in your life. Equally, you will become a better person by taking a spiritual path.

Generally, yew tree symbolic meaning indicates that you should learn how to live despite the environment you are in. Basically, you can be in a particular environment that seems challenging. That can affect you negatively but learning how to adjust to that change is a step forward. Furthermore, you will someday congratulate yourself for not changing your path because you have found what you have been looking for. Notably, the beauty of your life depends on the hard work you act on. Equally, you are in a better position to change your life.

Yew Tree symbolism indicates that there will come a time when good things will be attracting your life. That means whatever you are doing now will play a part in who you will become in the future. On the other hand, overcoming your challenges is your joy. You will be happy not to give up regardless of the difficulties. Perhaps, you should deliver yourself to a better place by becoming smart a little more. More so, you should accept learning new things in your life. Notably, you will someday be happy for taking the right steps and respecting your decisions.