Triskelion Meaning – What Is This Symbol?

The triskelion is one of the more common Celtic symbols used in popular culture, but it has been around since Neolithic times. It is a symbol of three conjoined spirals that curve outward in a flowing fashion and presents a lot of meanings.

Since Christianity found its way to Ireland, the triskelion has been symbolic of the Holy Trinity: the Father, Son, and Holy Ghost. From this perspective, we can see themes of the cyclical nature of life and also eternity. Celts recognize notions of competition and the progress of humankind. Therefore, ancient Celts truly recognized two major symbolic components when looking at the Triskelion. 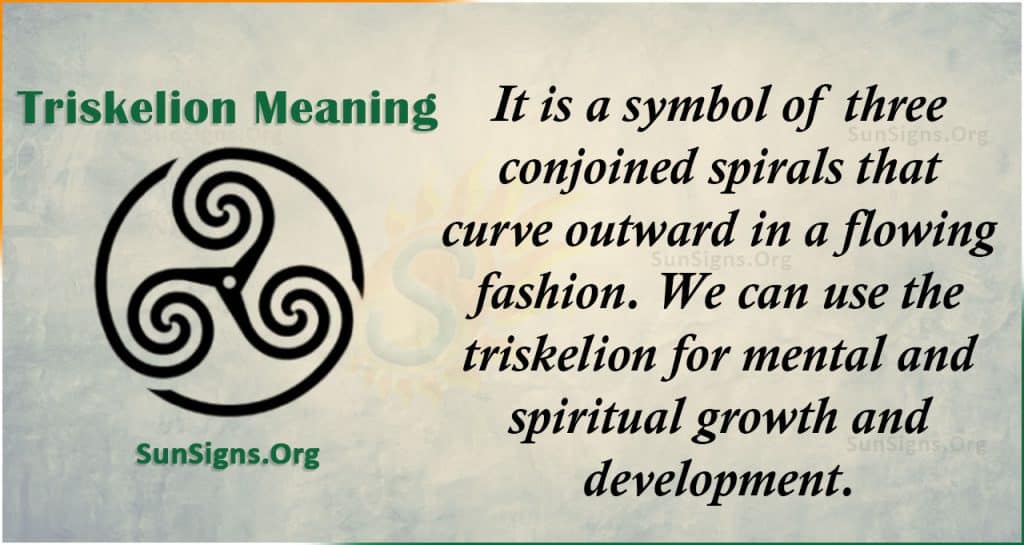 Origins of the Triskele

History is something that fascinates the mind. In the past, people were more creative than they are now. Humans believe in things that they see. In the past, symbols, including Celtic symbols, were used to represent lots of things and give meaning to moral values and characters. Symbols were also used to represent gods, creatures, and plants that influence our day to day lives. The symbols made in the past continue to shape the way we see the world today.

The Triple Spiral or the Triskelion is one symbol that has become more popular with both time and geography. History shows that this Celtic symbol predates even the Celts themselves. Also, the shape of the Triskele was there since the Neolithic period. Archeologists have found sites that show that this symbol and shape has been in existence for a long time. The oldest Triskele on record dates back six thousand and five hundred years. The location of this symbol is in Malta. Thus, the best surviving Celtic Triskelions are however present in Newgrange in Ireland. Other ancient artifacts that bear this symbol are vessels from Mycenaean Greece and coins from the State of Lycia.

The first component deals with the fluidity of the “legs” in the appearance of the symbol. The Celts considered this to be indicative of motion since the three branches are always positioned in a way that makes them appear to be in constant forward motion. With this in mind, the Celts (and other groups across Western Europe that used the symbol) associated the Triskelion with ideas of action and moving forward.

The triskelion symbol was popular as an indication of both fierce and friendly competition. For humanity, this symbol could be used to inspire revolution or to symbolize the progress that societies have made. In a natural sense, though, the constantly revolving triskelion portrays the ever-moving cycles that exist in life: day to night, season to season, birth to death, etc..

Different Designs of the Triskelion Symbol

The Triskele is unique because of its three branches. The number three signifies deeper meaning in life and Higher Power. Number 3 appears in numerous religious books, myths, legends, and fairy tales. The Celts held this number with great respect and honor. The branches of the Triskele emerge from the point of origin that they share.

In Christianity, the branches of the Triskele being three depict the Holy Trinity, that is, God the Father, the Son, and the Holy Spirit. Number three also signifies the number of times Jesus went through temptation in the Wilderness. The positive aura that surrounds three is strong because it connects to Godliness. Jesus rose from the dead on the third day according to the Gospel books of Matthew, Mark, Luke, and John.

In Hinduism, there are three aspects of God, Destroyer, Preserver, and Creator, three Goddesses of destiny, and the three deities who created human beings, Ve, Vili, and Odin. Thus, the Triskelion is held in high regard by people all over the world because of its connection to 3. 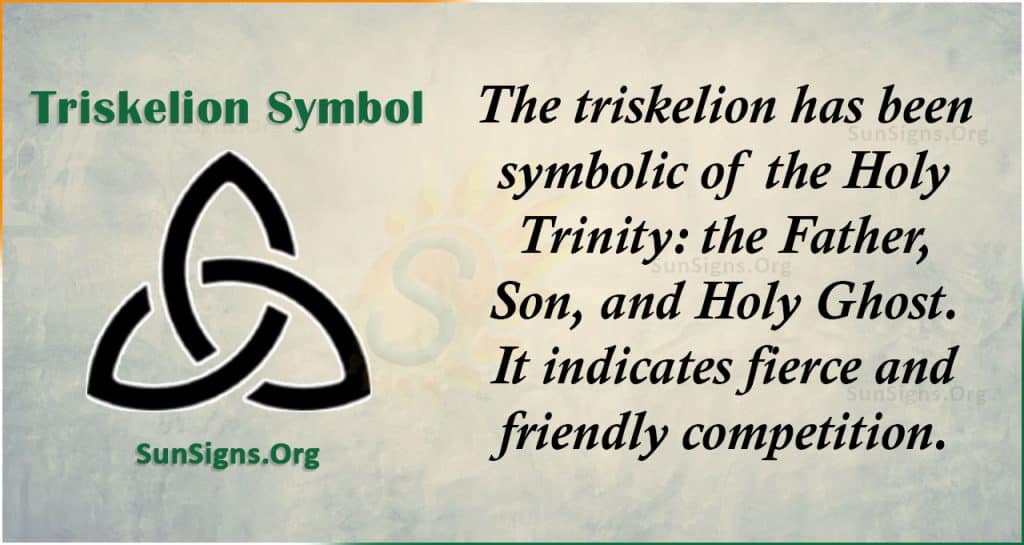 Number Three and Its Relation to the Triskelion

The Celts also had a second approach to interpreting the ancient triskelion, which focused specifically on number three. Many trifectas get representation from this three-pronged symbol, each dependent on the region, culture, era, and individual. The combination of three branches often refer to spirit, body, and mind; mother, father, and child; past, present, and future. It can also speak of a non-Christian trilogy of divinity, such as the Creator, Destroyer, and Sustainer, and their subsequent roles of creating life, preserving it and destroying it when necessary.

Most likely, though, the triskelion was viewed as representative of the three worlds that the Celts believed in: the Celestial World, the Mortal World, and the Otherworld. In the Celestial World, the sun, moon, wind, and water exist with other unseen physical energies while humans, plants, and animals occupy the Mortal World. The Otherworld is the home of the gods, goddesses, and spirits. The Celts accepted all of these theories, and still more can be found in other cultures. Just as the saying goes, beauty is in the eye of the beholder – and so is meaning.

Together, the themes of motion and the triad form a story. The Celts viewed this simple symbol as telling a complex tale of moving forward on a journey through life to reach the terminus of real understanding (or enlightenment). Although they held great symbolism and value from other numbers, “three” was believed to have very powerful energy associated with it.

The Celts had several reasons for thinking this. Apart from the numerous trilogies that the triskelion symbolic meanings could symbolize, the number three was also connected with phases of the moon: new, half, and full. When we view the Triskelion as a lunar symbol, we open up the possibility of an entirely new list of potential symbolism.

In the darkness of the night, the feminine and maternal moon offer a mysterious light. Creatures and spirits of the night are known to move silently, acting with subtlety and relying on well-founded intuition. They inspire us to act similarly, trusting our intuition and allowing it to evolve. We mustn’t show all our cards. Rather, we should keep some mystery and subtlety in our own lives. Then we can see the greater picture and gain the almighty wisdom.

Adaptations of the Triple Spiral

The Castro culture natives who originated from the Celts and found homes in Spain and Portugal, designed their Triskelions as crescent shapes emerging from the middle. This design is similar to the adaptation of table fans’ blades. The Sicilians, on the other hand, viewed Gorgon, Medusa at the protector of their Island. Medusa’s head was in the middle of their crest, and three legs emerged from the middle behind the crest to form a Trinity Knot.

The United States of America use the Triskelion symbol on their United States Department Transportation seal. This symbol also represents the Spiritual, physical, and celestial worlds. The variations of the Triskele is also found on the Fussen Coat of Arms in Germany and the national flags of Britanny, Sicily and the Isle of Man. Thus, Triskele is important in different cultures, civilizations, and centuries because of its diverse meanings.

Those are a lot of differing interpretations for Celtic symbols, but they are all founded in a belief in a strong and meaningful spiritual nature. The triskelion has broad connotations for the Celtic tradition and is still in use by each of us today. In general, we can use the Triskelion for mental and spiritual growth and development. By expanding our hearts and minds, we can continue down our path more joyously and meaningfully.