The use of knots and their various designs began quite early in human history, but the Celts developed their own unique designs from their woven plait work. The ancient Celts were big on Celtic knots. They were also big on oak trees. Put the two together and what do you have?

The Dara knot. Dara comes from the word “doire”, which is Celtic for “oak tree“. Oaks were the most blessed of trees to the Celts. The Druids interpreted the language of them to spread meaningful, philosophic messages to others. Remember, Celtic culture relied heavily on nature and spirituality. Fittingly, the design of the knot symbol is based on the root system of the oak tree.


Celtic knots are mostly endless – and for a reason. Each of them was and continues to be a symbol of some form of infinity and eternity, with specific stylized aspects being used to denote certain other qualities in our human lives. The Celts used stylized knots as decorations, good luck charms, and aids for teaching lessons. Specific knots, like the Dara knot, were known to be symbolic of the intricacy and symbolism of nature and its forms. 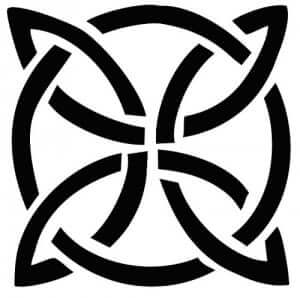 Oaks were also known as “duir” in the Celtic Ogham, which was the symbolic language of trees. As the most important of trees, oaks symbolized strong and powerful characteristics, such as wisdom, leadership, and endurance. They were called upon during times when people were lacking in these areas and wished to invoke these traits. Thus, the Dara knot served a similar purpose, providing strength during tough times.


As a symbol of oak roots, this knot reminded the Celts of the resources that each person possesses in their own roots (or deep inside themselves). We can call these resources, such as strength and wisdom, to action regardless of the circumstances that we find ourselves in.


We each have an inner strength that should neither be forgotten nor taken for granted. This is a general symbol that all knots represent: an internal strength of the spirit.

Dara knots do not have one single design. Rather, there are many depictions of them, all with the central theme of an oak tree’s root system. When you find yourself feeling down, you can turn to this tree symbol as a reminder of what you are truly made of. By doing this, you can pick yourself up, regain your confidence, and continue on your path toward enlightenment and joy.