The Goddess Inanna made quite a name for herself in ancient Mesopotamia. Traditionally seen as the Queen of the Sumerian Pantheon. People also believed her to be the goddess of love, fertility, abundance, and war. Readers can often find Inanna being called by other names.  They include Ninanna (Queen of the Sky) and Ninsinanna when she is viewed as the personification of Venus.

Ancient Babylonians knew her as a great Ishtar. Various myths from ancient times portray her in a fairly fickle light. Writings narrate that she was vengeful, specifically with her discarded lovers. She was also selfish and vain, appearing in a legend that explains her demise. Ruling the upper world became unsatisfactory for Inanna. This made her descend upon her sister’s territory in the underworld and attempted to take over.

Having been found out by the sister, Ereshkigal, Inanna was turned into a corpse. Although the sister eventually rescued her, the goddess damned her husband to spend six months each year in the miserable place. This is because she felt that he did not show sufficient signs of distress at her disappearance. Fittingly, she is not considered a sky goddess merely because of her link to Venus. Her wrath gained her the goddess of rain and storms. Thus, the Inanna symbol had both a fear-mongering strength and a flawed weakness. Although she was a ruler who others feared to cross, her fickleness and tendency to get bored with her many lovers led her to disaster.

Poets like Akkadian and Enheduanna, the high priestess, referred to Inanna symbols as the foremost Sumerian goddess. The early goddess lists mention Inanna, Anu, Enki, and Enlil as the four main deities. People knew the Goddess as a special protector of Kings in times of battle and also in politics. Inanna made her dwelling in chapels or temples in most cities. But her main sanctuary was the Eanna, also known as the ‘house of heaven.’

The Goddess Inanna makes an appearance in many myths of ancient Mesopotamia. One is an early creation myth, Inanna and the Huluppu-Tree. The other is Inanna and the God of Wisdom. After getting gifts from Enki, the god of wisdom, she brought culture and knowledge to the city of Uruk. Inanna was known to be personally ambitious. Dr. Jeremy Black explains that Inanna’s symbol would be beside her favorite Kings during battles in her lust for power.

Inanna was one of the most widely acclaimed deities in the Sumerian pantheon, with temples in Nippur Shuruppak, Lagash, Ur, and  Zabala. Inanna’s worship was widely spread in the Upper Mesopotamian kingdom of Assyria, in the cities of Nineveh, Arbela, and Aššur. Ishtar also became the most important and widely recognized deity. She even surpassed the Assyrian national god Ashur in the Assyrian pantheon. This was during the supremacy of the Assyrian king Assurbanipal.

Several lesser or regional deities were assimilated into Inanna meaning because of her prominence. Among them were Anunitu, an Akkadian light goddess, Irini, the goddess of cedar forests in the Lebanese mountains, and Agasayam, a warrior goddess. People who went against gender traditions were heavy followers of Inanna. Some priests who worked in Inanna’s temples adopted female names.

Aspects Of The Goddess Inanna

The lion in her company always depicts the courage of Inanna. Inanna symbolic meaning rides on top of a lion to show her supremacy. In times of war, she depicts her supremacy by wearing an amour of a male while armed with a bow and quiver. She would arm herself with weapons and a beard to show her masculine side.

In love and sexual behavior, Inanna refers to extra-marital sex. She is neither connected with motherhood nor marriage. Though she participates in sacred marriage, she does not have any impact on human marriages. She exercises her freedom in doing what she wants, not minding the consequences. In fact, she manipulates others to try and fix her problems.

Even when gods highly replaced goddesses during the reign of King Hammurabi of Babylon, Inanna stood still. Other goddesses did not do well, but Inanna’s adoption as Ishtar, goddess of sex and war by the Assyrian, helped her stay in her position.

Inanna’s accessibility and ability of people to recognize her was handy. Many people, male or female, could relate to her. All gender worked under her as temple servants, priests, and sacred prostitutes. People served her because of her greatness. This made them faithful to her even long after her temples were gone. The few people who still remember Inanna’s name associate her with the morning and evening stars. 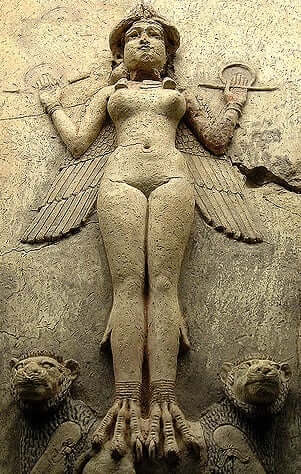 People worshipped and praised Goddess Inanna, even if it was out of sheer terror and the inclination to beg for fertility. Her primary symbol refers to agriculture. She controls abundance and fertility. In fact, people incorporated her into the ancient Sumerian wedding ceremonies. Performed at the Sumerian New Year celebration, the sacred rite included the invocation of Inanna to bless the newlyweds with fertility and abundance. Accordingly, her symbol of a spiral or twisted knot of reeds speaks of this connection to reproduction in nature.

Across Mesopotamian societies, people viewed Inanna as a symbol of the divinity and dominance of feminine energy and its power in ensuring creation. They considered the “bundle” of reeds a fairly sacred symbol for many reasons, but its connection to Inanna pertains to one particular legend. It states that Enki planned to annihilate humankind with a great flood, but Inanna built a great vessel out of the reeds – think of Noah’s Ark for clarification.

Although vengeful, wrathful, and, at times, seemingly insatiable, people worshiped Inanna for saving the human race. Her connection with rain and storms also plays out in a calmer and more relaxed fashion, with people deeming her the River of Life.

Inanna’s symbol is always seen as a young woman, probably in her early twenties. They often depict her as a reed bundle or a gatepost to show fertility, abundance, and procreation. Her naked appearance is a symbol of fertility and femininity.

After all, reeds grew in the water, meaning she must have had a connection to purity symbolism, even if she didn’t behave in an overly pure way herself. As stated above, with the mention of Noah’s Ark (in Christianity and Judaism), many ancient cultures developed stories of creation in which life emerged from the waters after the destruction had passed. If she facilitated this, it makes sense why they viewed her as so powerful and mighty.

In addition to saving humanity and traveling along the great rivers of the world, this goddess symbolized more general traits and qualities, all of which can be interpreted through her bundle of reeds. People sang themes such as protection, purification, a sense of purpose, and clarification in her name.

All of the themes continue to find common ground in the water element, which is interesting, as humans are largely made up of water. As such, our lives (and the lives of the ancient Mesopotamians who created her image) can easily relate to all of the stories concerning her and water. By including the spiral in her depiction, the ancient people who worshiped her made a symbolic representation of the natural flow of life. From the center outward, people must learn to grow and evolve without ever forgetting the seed or core that is the soul.