Skull symbolism signifies that you need to work hard and build your own personal empire because you have the chance to do so. In other words, you can exercise your own strength by having hope and starting your journey step by step. Besides, you need to shift your mindset and embrace the action. This has been that moment you have been waiting for. Actually, you need to learn every lesson from the failures that you have faced in life. On the other hand, you need to understand that successful people fail a lot in life, but they fail to give up. So, you need to fail early, fail regularly but fail forward. Just get up and push forward.

Basically, Skull’s meaning implied that you should not be soft in life but face challenges that will make you grow. Perhaps, you should be a person who does not fear failure and loves success. Let the negative side of you be less than 1%. In fact, when you love success and start going for it, then you will become strong enough. Imagine being strong until you see any failure as a chance that will get you there. Notably, never waste any chance in your life by giving up on your dreams. You have a chance to become great.

More and more generations are getting tattoos every day. Some new designs are coming into the mainstream, but one design that has always been popular is the skull. Why do people get skull tattoos in the first place? Is it because they are trying to look tough? Are they trying to be scary? Basically, you should no be scared about life but be courageous. You should realize that becoming brave is a chance to become successful.

Or do they just think that the design is cool? No matter why someone has a skull tattoo or why they are thinking about getting a skull tattoo, it’s always interesting to know the symbolism behind it. There is symbolism inside of everything, even an inanimate skull. The symbolism of the skull is a little spooky, but it also has some rather interesting positive symbolism as well. 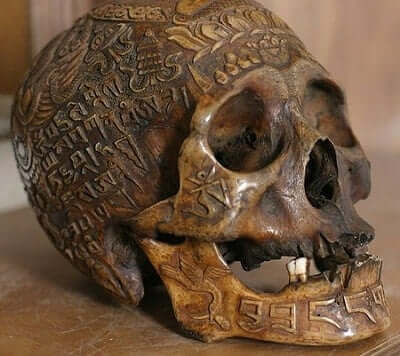 Let’s get the more obvious and spooky symbolism out of the way first. It is obvious that the skull would freak some people out. It’s inside your body; it isn’t really meant to be seen.

The only way to see it is for a dead body to decompose. It’s hard not to think automatically of death when you see a skull. The “death” aspect of the skull is probably the symbol behind the skull.

Death is highly important when we think of the skull. In most paintings and other depictions of the Grim Reaper or of Death itself, we see a skeleton. While a skull is only part of a whole skeleton, it still carries the thought of death wherever it is seen. This fact makes us think of our death at times. This helps to symbolize not only death but life and mortality as well.

The Grim Reaper, or the personification of Death, also symbolizes wisdom above humans. Death knows when we are going to die and how it is going to happen. There is nothing that we can do to prevent it. Death is always wiser than us, making the skull a symbol for both divine wisdom and general intelligence.

The skull symbol has other meanings besides death, but these meanings are also closely related to our mortality. If you’ve ever seen a pirate movie or an older war docudrama, then you may have seen a skeleton or a set of skills on the outskirts of a village to warn passersby. This isn’t some scare tactic that Hollywood made up. Things like this happened in real life. Of course, it rarely happens today, but it was vastly used as a way to warn people hundreds of years ago.

Villages and cities would hang up their enemies dead. This would warn them that if they came into their territory that their fate would be the same, if not worse. This was a clear message and probably made many people wary of entering strange new places. Because of this trick in history, the skull was related to the symbol of warning.

However, this very same message was also a symbol for protection. The planted skulls worked in two ways, to keep out people who could be killed by the villagers, but to also keep out these same people so that the villagers wouldn’t be killed by them. The dual nature of the skulls not only stood for warning, as already stated but also for protection. Even though a person doesn’t usually think of protection when they see a skull, it is still a symbol for it nonetheless.

No matter why you have a skull tattoo or why you are thinking about getting one, it is always interesting to know about the skull symbolism. The skull is not just some spooky thing but instead a symbol for wisdom and protection. If nothing else, knowing the symbolism behind your tattoo will make a great story. If you want to learn more about tattoo design symbolism, or symbolism in general, then you can read more articles like this one here on Sunsigns.org!

Basically, Skull’s symbolic meaning implies that your life should be your major concern. In other words, you should be strong to pursue your dreams in any case. No one should deny you that chance because you will live regretting life ever. In other words, you can become a slave of yourself by seeing the negative side of yourself. Notably, take every chance now to avoid future regrets. Remember that life is too predictable, and you can see great chances before it happens.

The reason why Skuld symbolism is a sign of wisdom is to teach you about life experience. Besides, greatness is achieved through hard work and patience. So a wise person will tell you about those aspects and how it works with everyone. Actually, you should be willing to learn new things in your life to constantly remain adjustable to changes. You need to be optimistic and live a life of positivity. Probably, you will soon achieve your dreams because you have decided to take the right steps in your life. You understand that greatness is next to you. Equally, you should not be afraid to fail because that is the wisdom that will make you successful.

Skull’s symbolic meaning implies that you should move in the direction that will make you strong. Besides, it is your decision to make either to live a happy life or live with regrets. A life of regrets is someone who gives in to their dreams. Do not ever give n but be strong o go after your dreams because you will keep failing until someday you become successful. So, you need to keep pushing step by step and believe in yourself. Remember that what you are going for is something that will make the entire world rejoice. It is not easy to earn, but it is worthwhile.