When you keep seeing Celtic trinity triquetra symbolism, it means well to you. It is a sign that divine beings protect you. Also, the Celtic trinity symbols talk about the core values in life that you need to adhere to. The intersection of the vesica Pisces represents the collaboration you will have in life with the people who truly value your friendship. Indeed, the best time to look for the Celtic trinity signs is when you want guidance and direction in life. One of the Celtic trinity sides has a pointer to guide you on the best path in life.

What Does The Celtic Trinity Knot Symbolize?

Seeing the Celtic cycle in life means pillars or foundations. In essence, there is a symbol that you must create a balance in your life. In your endeavors, do not concentrate on one thing and forget others. All your plans are important, and if you want to be stable in life, kindly make solid foundations around the things that make you unique and outstanding; for instance, your passion, family, and healthy are of consideration.

Additionally, the Celtic knot is symbolic of your protection. This symbol scares away evil people, and evil plans will not have their way in your life. Besides, the Celtic circle represents wholeness, strength, and victory.

What Does Celtic Symbol Represent?

The Celtic triquetra represents women’s power. It empowers womanhood. Also, it represents diversity and change that come along in association with women. Remember the trimesters of pregnancy that bring about new generations. Thus, fertility is also another symbolic meaning of the Celtic trinity. However, Celtic triquetra symbolism also indicates endurance and overcoming challenges in life. A triangle is always steady. Therefore, this sign represents steadiness in life. It is symbolic that you should not succumb in life; instead, overcome and endure hardships.

Some people use the Celtic knot in wedding rings to signify their love. It represents a promise from lovers that they will remain dedicated to their lovely union. When a triquetra ring is given to you, it means a good sign in your love life. Besides, it is a sign of unity and a future for two love birds. Remember, the triquetra circle is a sign of strong bonds between people.

What Is The Celtic Triquetra?

The Celtic triquetra is attached to a multitude of symbolic meanings. For that reason, we can find it throughout Celtic artistry. This symbol, also known as the “trinity knot,” is meant to represent a trifold of things that are not independent of each other, a relationship of sorts. It may be to love, honor, and protect, as is commonly meant by wedding and engagement rings.

Alternatively, Celtic Triquetra can also symbolize the phases of infinite life, life, death, and rebirth. The number three is highly revered and represented throughout Celtic culture and tradition. Because of this, they found a plethora of triangle meanings to associate with their trinity. Some are Christian, some are Pagan, but most are of a completely non-religious nature. 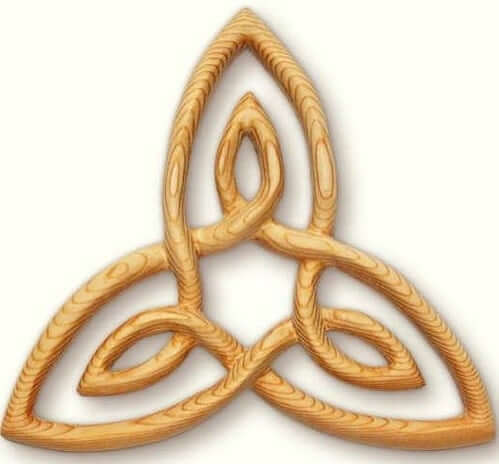 The Christian versus non-Christian meanings differs only slightly and still hold some of the same core values. Once Christianity made its way to Celtic lands, and St. Patrick saved the souls of Ireland – the trinity began to reference the Father, Son, and Holy Spirit. This can also be attributed to the fact that St. Patrick used a shamrock symbol to explain the same trilogy of entities.

Long before him, though, the Pagans and Druids took a slightly more Earthly, physical approach to the symbolism. Rather than describing deities and spirits, these people used the triquetra symbol to portray the natural elements of earth, air, and water. When the Druids and Pagans did opt for a more spiritual explanation, they viewed the trinity as a symbolizer of the trifold, three-phase nature of existence: life, death, and rebirth. They also broke down the three-pronged trinity into symbols of the three-character associations of Bridgit, who was a powerful goddess: art, metalworking, and healing.

Possessing these gifts was considered an honor, as you would receive them and live in this holy goddess‘s image. Spiritual as they were, there is also evidence of another analysis of the triquetra, one that divides the natural, spiritual, and energetic worlds. The Otherworld was where gods, goddesses, and spirits roamed, while humans, plants, and animals inhabited the Mortal World. The Celestial World contained all of the unseen energies of our universe.

The trinity is also depicted outside the realm of organized religion in Celtic tradition. We often find this motif in Celtic knots as well as in symbolic form in emblems and artwork. This suggests that the symbol was present in the most ancient of Celtic minds. During that time (and since), the triquetra may have signified the lunar and solar phases, which were highly symbolic themselves. It has been found drawn on objects that have been found during archaeological digs, so we have quite a bit of proof to support this theory. Additionally, we know that the Celts worshiped a Great Mother Danu, a lunar goddess who assumed her form in the three lunar phases.

From a general standpoint, whether religious or not, the Celts applied several other meanings to the trinity that essentially boils down to a single theme: three separate entities that are interconnected. The traditional triquetra is also sometimes accompanied by a surrounding circle, a well-known symbol for eternity. This eternity can signify a deity’s infinite love or even just the true nature of life itself. Whatever it is, the circle adds even more significance to the trinity symbol.

As you can see, no single interpretation can claim to be right or wrong. Virtually anything that comes in three teams can be represented and reflected upon while engaging with the Celtic triad. Apart from the religious and spiritual, the Celts used this versatile symbol to describe everyday events and emotions: power, intellect, and love; past, present, and future; thought, feeling, and emotion. None is more important than the other. Each represents a perfectly triangular balance that is necessary for our multi-faceted lives. The Celts truly were wise beyond their years.

The Celtic trinity triquetra symbolism shows that there is life after death. This is a hidden symbol that urges you to come out of situations alive. Besides, it reminds you that nothing is impossible with a willing heart. Thus, keep trying your best to resurrect your dreams and visions. Indeed, the Celtic trinity symbol will always offer you the protection you need in life.