The archangels are glorious spiritual beings that move at incredible speed and frequency. They each come with unique attributes that play a specific role in your life. They were created by God to execute his tasks and ensure that all things in the universe work seamlessly. Like all archangels, Archangel Michael is wonderful and works quickly. They always radiate divine love and pure energy in the world.

Archangels serve according to the divine will. They act as intermediaries between life as you know it and the divine realm. You should not be afraid when they visit you. It shows that they are helping and guiding you through life for your highest good. You should learn about different ways that they reveal themselves so that you may reap maximum benefits from their visits and revelations. Archangels also oversee the guardian angels hence guiding them and other angels on how to assist you in your life’s journey.

You should know that archangels mostly come to your aid when you invite them. Otherwise, they do not interfere with your flow in life. The archangel Michael is otherwise referred to as the Chief Prince of the Heavenly Realm, as he is the head of a battalion of angels.

Archangel Michael is recognized in Christianity, Judaism, and Islam. Some religions refer to him as Saint Michael. He was the patron saint that came to rescue the Jews even after rabbis prayed for God to abandon the Jews as recorded in the Jewish religious books.

Michael archangel is also known for leading heavenly armies to fight against the forces of evil brought by Satan. In Christianity, it is believed that Archangel Michael will rise up at a time of great tribulation and come to save humanity. The great tribulation has yet to occur since the world began.

Although archangel Michael leads the angels, he is not their ultimate leader. You should know that the Creator is the ultimate leader of the universe. God also identifies Jesus Christ as his son. Therefore, Michael is not considered as the son of God.

Michael archangel is the only one who has been mentioned in the three major sacred books of the world. That is the Torah, Bible, and Qur’an, which makes him exceptional. He is a fierce leader who fights the power of evil with good. Archangel Michael ferociously defends human beings with the love of God. His major concerns are truth and justice. He ensures that humans adhere to both of them.

His pure light will help you dissociate from all forms of addictions and negative patterns. Although his mention is in religious texts, you do not have to be religious to call on him. Michael, the archangel, is available for many other reasons that you may not be able to grasp. His position in the heavenly realm exposes him to staggering knowledge and wisdom. 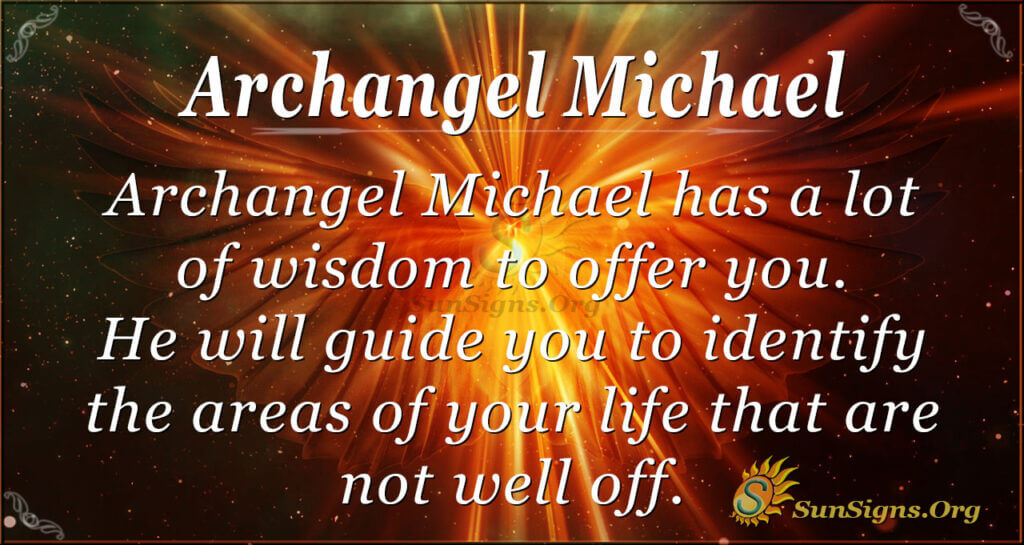 Michael In The Bible

The name Michael means “Who is like God.” Archangel Michael holds immense knowledge of the earth, heavens, and the cosmos. He gave Abraham a tour around the inhabited world before preparing for his death. Through that experience, he advanced his expertise in guiding. Archangel Michael is dependent on God. He does not act on his own impulses or accord, rather, through God’s instructions.

Although the Bible does not give any vivid descriptions of archangel Michael, it describes that his body is different from the earthly bodies. Paul, in the bible, explains that the heavenly bodies are different from the physical ones. As such, artists imagined Michael to be taller, stronger, and with abilities to move very swiftly between two places.

The Roles Archangel Michael Plays in Our Lives

Archangel Michael is a ferocious defender of human beings and he comes to your aid to ensure that your judgment is fair in all situations. He also guides you to tell the truth even when you are unsure about it. Michael archangel is a helper. His work is to assist you in navigating life safely and live according to your higher purpose.

This archangel guides you towards living your truth and elevates you to the point of discerning truth from lies. Michael archangel also guides you as you trade and do business so that you ensure fair trade and avoid getting tempted to be fraudulent. This archangel commands an army of angels to come to your protection against any dark spirits.

When Will Archangel Michael Help You?

This archangel will help you let go of low vibration generated by energies of fear and worry. Through that, you will be able to open yourself up to the fulfilling experiences caused by love and confidence. As a result, you will live a fun and fulfilling life on earth. He shines with divine energy and is here to help you. He draws his power from nature, especially the sun. Archangel Michael can singlehandedly raise collective awareness in the entire human population. That reveals exactly how committed he is to assisting humanity to grow, unlock divine knowledge, and shine Christ’s light on you and your loved ones.

If you wish to connect with Michael the archangel, you have to be respectful, humble, and honest with him because he is powerful. You should approach him with reverence as well as he holds vast energies that would help you in all areas of life. Archangel Michael has a lot of wisdom to offer you. He will guide you to identify the areas of your life that are not well off. Michael archangel’s light is so powerful. So when you feel afraid, doubtful, or insecure, his light will cut them off. You will feel liberated and light.

Archangel Michael holds a very sharp divine sword that helps to cut away negative energies that otherwise pull you down. You should allow yourself to bask in his light as it will lead you to get more confident and bolder. After invoking archangel Michael and interacting with him, you will experience a calming peace, and your mind will be able to focus on your goals in life clearly.

When you call on his name, do so with respect and wait for him to answer you. Guard your heart against doubt or pride as they are negative energies. Instead, affirm your intentions and practice patience. Archangel Michael answers even the most basic questions. Since no restrictions apply to archangel Michael, you can call on him any time, and he will reveal himself to you.

Although Michael is supportive and compassionate towards humanity, the sole responsibility of making necessary changes lie on your shoulders. You should invest time in adjusting your actions so that they align with your higher self. Archangel Michael’s presence is enough to make you question the truth of your nature. You will be able to notice all the negative patterns you have adopted for survival or as addictions.

At times, Michael may choose to reveal himself as you go through hardship. He will often manifest as a strong voice that addresses you. If you find a persistent voice bearing a direct message, that is a clear sign that he is speaking to you. Unlike other archangels and angels, Michael speaks to you directly and concisely. Because of his style of communication, you will be able to know exactly how to proceed.