How good or bad is the love compatibility between a Aquarius and Capricorn emotionally, mentally and sexually? Read on…

The Aquarius and Capricorn love compatibility will bring out the best in each other. Capricorn zodiac sign will have a more careful, rational look on life. They will be relieved that they will have the water bearer to help them on their personal things. Aquarius star sign is more insistent. They will have an idealistic look on everything. They might look like they are very opposite on the surface. However, when they see each other they will form an unbreakable connection. At the same time, they will think the steady base that the goat can give them is very encouraging.

Aquarius and Capricorn relationship  is both ruled by Saturn. The planet Uranus rules over Aquarius. It will be concerned with things that are strange and different. They will be very goal focused. They will be devoted to progressive thinking. Aquarius and Capricorn in love will mix their stronger traits. The Aquarius personality will be moved to revolutions. They can help the goat to dream more. They can show them how to stand up for their beliefs. Capricorn personality will be moved to advance their social status. They will show the Aquarian a life that is based on organization and comfort that is rational. 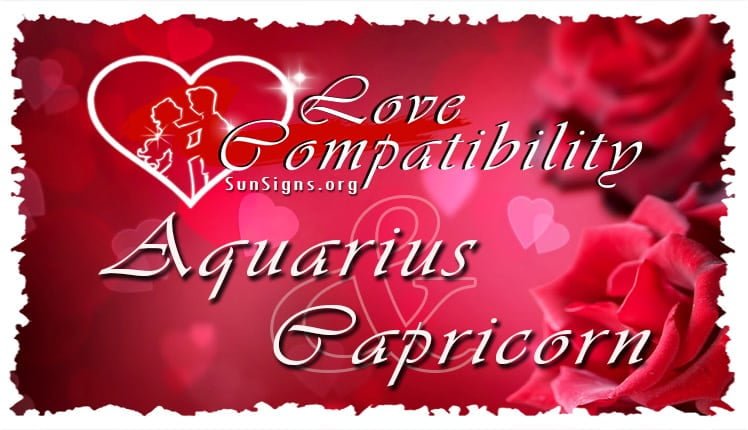 The best thing about the Aquarius and Capricorn love compatibility in a romantic relationship is the strong bond they will form when they come together. They will both find the relationship enlightening and happy. They will have a love that will be a valid asset to both of them and those around them.

Aquarius Capricorn soul mates are very different on the surface. The goat will like to conform. They like to play the game and see results from doing what is expected of them. The water bearer will not like to conform. They will not want to stick to the rules. They will want to see results by using very different methods. They might seem like they would not like each other’s differences. However, they will be very interested in each other’s different approaches.

Aquarius and Capricorn in love will work together in a way that shows the kinds of connections air signs and earth signs have. Capricorn men and Capricorn women can be too grounded. Because of this, they might seem stuck. Aquarius men and Aquarius women will be able to stir up the ground. They can give the goat some lift. They work in the airy world of thoughts and ideas.

In the Aquarius and Capricorn marriage both will have a lot of respect for each other. They are both very intelligent. Capricorn is the sage of the zodiac. They are wise. They will understand that Aquarius will need and want a certain amount of independence. They will be careful not to suffocate the water bearer. At the same time, Aquarius is very bright. They will realize how far they can push the sea goat outside of their comfort zone. They will quickly learn to bring light and new experiences to the Aquarius Capricorn relationship in bed without overdoing it.

In the Aquarius and Capricorn love compatibility both will be emotionally distant in their own way. Capricorn will be a seductive earth sign. Saturn will rule over this sun sign and is restrictive and responsible. The goat will want to avoid big displays of emotion.

Aquarius zodiac is ruled by Uranus which is unpredictable. They are notorious for being emotionally distant. Because of this, they can find it hard to relate on an emotional level. When they work together, the strange earth and air magic will work again. They might be pushed to express their emotions to each other. Because of this, they will be well rounded and healthy. Aquarius and Capricorn being compatible will mean finding an emotional outlet that they might not have found on their own. Otherwise this relationship will break down in seconds.


Aquarius and Capricorn relationship can be opinionated. They might seem like they are unwilling to compromise. Capricorn will be happiest with organization. They will always be looking for consequences. They might be frustrated trying to find logic in the mind of the water bearer. Aquarius is more modern. They will think that routines are boring. They will have a random and mysterious mind. They will not like how the goat can be dominating.

Aquarius is a Fixed sign. Capricorn is a Cardinal sign. They can both be opinionated and stubborn. They will both have a strong motivation to obtain the objects that they want. When they make a plan, they will stick to it until they get what they want. Capricorn will want to think of the ideas. They will want to hand out the assignments on a project. They will be more than happy to help the Aquarius if they are given a substantial role. They might have major arguments because they are both stubborn leading to an Aquarius Capricorn breakup. They will both need to understand that they are working toward a common goal together. They will easily be able to accomplish more noticeable results if they don’t fight.

The sage is wise and rational. The visionary is genius. When Aquarius and Capricorn zodiac signs mix their traits, they will make an unbeatable combination for a friendship or a business relationship. When they add in magic of romance, they will have an unlikely but very good romantic relationship.