The balance for this Aries woman Aquarius man compatibility can be found in their strengths. The male air sign is creative, and the female fire sign is active, making them a force to be reckoned with when they come together. The Aquarius man supplies her need for new and exciting adventures, and the Aries female helps him execute their plans.

In the Aries woman Aquarius man friendship, they realize their intellect is a perfect match for the other. When the Aries woman starts dating the Aquarius man, their witty banter and playful exchanges then become more serious as the relationship begins to develop. The Aries woman in love admires his individuality, and he appreciates her ambition.

The Aries woman Aquarius man soulmates are equally independent and are perfectly content with giving the other his/her space. And with the Aquarius mind and the Aries body, there’s nothing they can’t do to sustain a fulfilling romantic relationship. This partnership has a lot of promise, so make the most of it! Read about Aries compatibility and Aquarius compatibility. 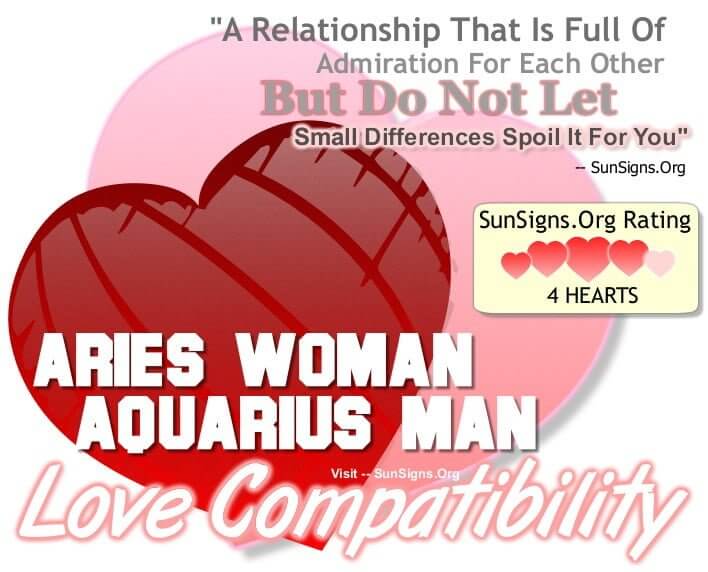 And their love life will thrive on this very principle if you are dating an Aries woman. The Aquarius male is very protective of his lover, which the Aries woman welcomes. His affection towards her makes her feel like the most important thing in his life, and she returns the favor with unbridled passion. She can be inventive in their lovemaking, and he will respond in kind, continuously challenging her to raise the stakes. Sexually, Aries woman Aquarius man in bed, make excellent love partners. Read about Aries woman sexuality and Aquarius man sexuality.

The commitment of these two zodiac signs to each other is unwavering, for Aries women are fiercely loyal and Aquarius men are vigilant in maintaining their bond. He finds her spontaneity refreshing, which is why he will tolerate her quick temper and impulsiveness. On the other side, she loves his outgoing personality enough to overlook his ever-changing nature.

For a harmonious union of these two sun signs, both Aries woman Aquarius man in love must focus on their enthusiasm for life and each other. This is the glue that will hold them together when arguments arise.

Just like the shifting winds, the Aquarius man can be moody from time to time, which is frustrating to his impatient partner. Likewise, her aggressiveness can be a turn-off for him. This is where trust and balance come into play.

When the Aries woman becomes too possessive, he will, in turn, grow cold and detached. At the same time, if he becomes too compliant in their relationship or with other people, she will unleash a firestorm of anger. “Everything in moderation” should be the motto for this couple, as they are a good fit for many reasons. Else the Arian won’t think twice before breaking-up.

When she wants to be dominant, he doesn’t mind stepping back to allow her that freedom. And she recognizes the stability of his calm attitude. But his cool character and her selfish ways can come between them if they allow it. Instead of focusing on their partner’s quirks, in the Aries woman Aquarius man marriage, both partners need to remind their lover why they fell in love in the first place.

Those discussions early on ignited an exciting partnership, one they need to nurture every day. The Aries woman Aquarius man’s shared desire for fun and adventure will keep their love compatibility enjoyable for years to come, and their mutual admiration for each other’s intelligence will enhance the experience.

Aries is a cardinal fire sign, and Aquarius is a fixed air sign, the Aries woman Aquarius man compatibility gets a FOUR Hearts rating. Again, it’s all about finding that right amount of air pressure to give life to the fire. And both the Aries woman and the Aquarius man are committed once that fire is lit. There is no going back in this relationship.