Uranus in the Sixth House of the Natal Chart

What does Uranus in the 6th House mean? These people know how to get things done perfectly and with creativity.

You work hard in the Sixth House. But, Uranus allows you to get creative with your workload. You thrive on finding new and interesting ways to handle mundane tasks. Because you are so detail-oriented, you’re able to come up with ideas that keep you engaged and excited about your routine.

In astrology, planet Uranus is a symbol of radical thinking, individuality, and originality. With  Uranus in the Sixth House, you have your way of doing things. Even though you are serious about your craft and home life, you also know the best way to take care of any situation in your marriage. 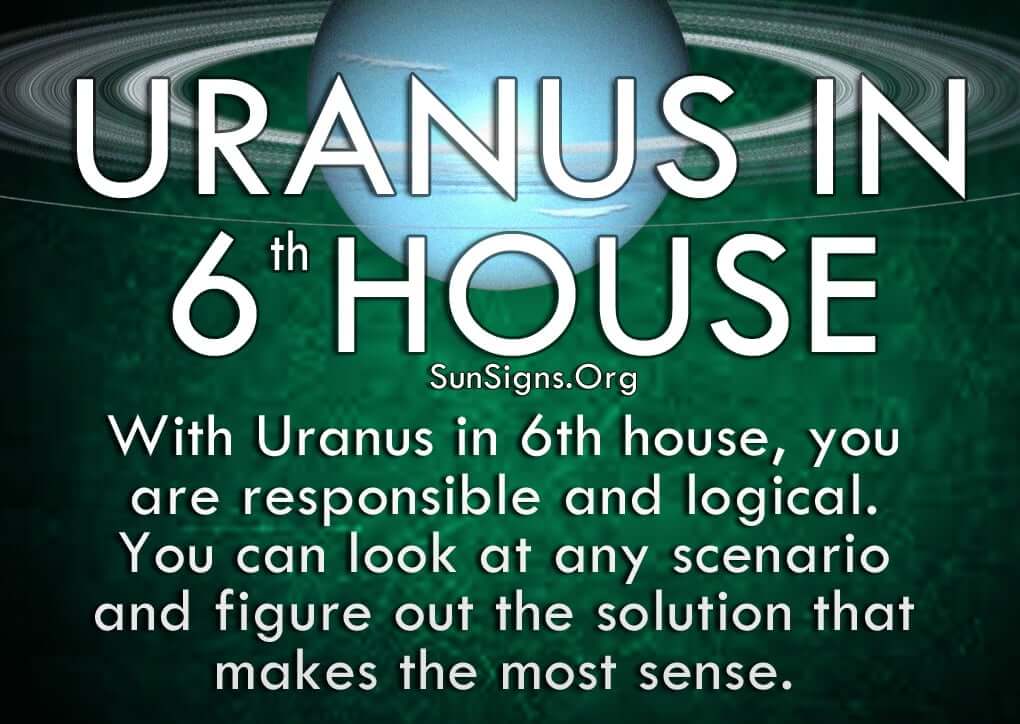 With Uranus in the 6th House, you are responsible and logical. You can look at any scenario and figure out the solution that makes the most sense. And you love adding unique finishing touches to anything you do, making whatever you do your own. It can be working on a project for your career or setting up an event for friends or family. You execute your plan flawlessly and put in little details that no one else would have thought of.

And people appreciate your sense of style and the care that you put into everything you do. But your perfectionist tendencies can get the better of you if you’re not careful. While you have these high standards, others don’t want it.

Uranus, in 6th house personality, enjoy their freedom as much as anyone else. So don’t push your ideas or ways of doing things on other people. While you feel you know best, others also have great ideas.

Let them join in the conversation and help you create a plan that works for everyone involved. That way, you can take some of the pressure from yourself and help other people to feel useful and appreciated.

The main problem Uranus in the 6th House have is placing high standards on everyone else around them. Then when these standards aren’t met, you become overly critical of someone else’s work. Don’t push your perfectionist desires on other people. Even those closest to you don’t want to have to deal with that.

You’ll have to get used to being one of the few people who pay that much attention to the minute details because it can become quite exhausting after a while. Sometimes people want to relax and have fun, and you have to tap into your creative Uranus energy to come up with something spontaneous but not taxing. Learn to let loose and live a little.

In Astrology, Uranus is a generational planet. This is because it spends approximately seven years in each of the Twelve Zodiac Signs. It is known for its eccentric nature. It is the ruling planet of Aquarius.

On the birth chart, the position of Uranus varies. It shows where your life is headed rather than what you need to do at the moment. Uranus in 6th House benefits a lot of people who are innovators, scientists, social workers, and revolutionaries.

Uranus in the 6th House Meaning

As a Uranus in 6th House man or woman, you should perform your duties with diligence, integrity, and determination. Perform your duties whether you like it or not so that you can elevate your life and the lives of your loved ones.

The placement is Uranus in the Sixth House also signifies freedom and independence. You do not like being controlled; hence, you tend to do most things on your own.

Uranus in the Sixth House Careers and Work

Uranus in 6th House natives do not like being stuck in a routine. They love doing things that are different every single day. For this reason, you use all your resources to chase after your passions because you like exploring new and different things.

When it comes to work, Uranus governs professions in Science, Technology, Computer Science, and Engineering.

The one thing Uranus in 6th House doesn’t want you to do is have a boring desk job that keeps you stranded in an office all day. Volunteer work is perfect for you, as is working in the field of technology or science. Here you can put your attention to detail to great use and come up with interesting solutions at the same time.

Like you want recognition for your hard work and good deeds, so do the other people who help you. If you learn to work within a team, you’ll have a much easier time pulling off your intricate plans, and it won’t be so stressful.

You have to let go of your perfectionist ways sometimes to enjoy what’s going on around you. You sometimes have trouble seeing the forest through the trees, and that can be more of a problem than you realize. Don’t miss out on the beautiful details of life!