This free Manglik matching calculator can provide you with the best life partner if you have been found to be a Manglik (Mars Dosha) from your natal chart. This can help you to find a much more harmonious married life which will benefit you instead of conflict. If you do have a Mangal Dosha then the Manglik Matching Analyzer is a test that you should take. It is free of cost and gives detailed and accurate Jyotish readings.

The impact of the Mangal Dosha can be so severe that there is a very real chance that one partner could end up dead if the marriage does not end with the two parties living apart or divorce. This is actually a very frightening proposition. 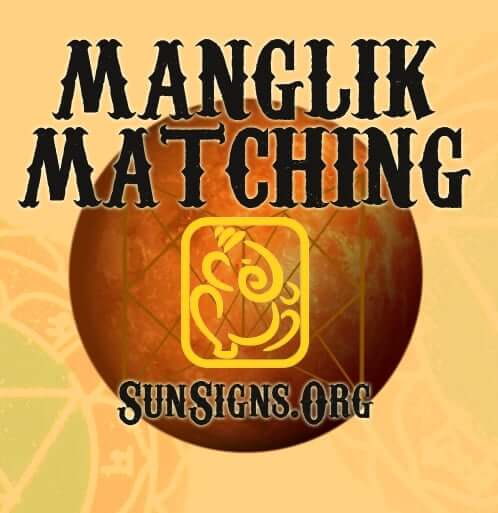 Today domestic violence is less tolerated. This could mean that there could be legal repercussions if there is a bad love match. Compatibility has always been important in marriage but with the seriousness of the Manglik situation, extra care must be taken to find the right partner. 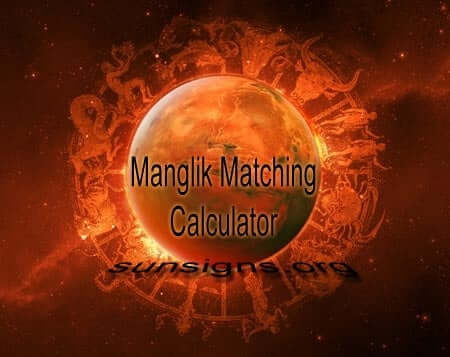 The Manglik Match test can be very helpful in this respect. The purpose of this marriage compatibility test is to determine an appropriate match who will cancel the ill-effects of this malefic effect of planet Mars or Mangal Dosha on your life.

Here is an idea, that does work under astrology principles, that wen two Manglik individuals are married many of the destructive effects of the Mars Dosha can be avoided. The Manglik Dosha of both individuals must be analyzed to determine if the match would be able to eliminate the negative effects. While this is sometimes possible it may not work in every instance.

If you or your partner or both are Mangalik, you definitely need to match your Janam Patrika using this Manglik matching test. If the degree of manglik matching is strong between the partners then it will lead to only the normal marital stresse and small spats.

In the case of any two individuals living in one household there will occasionally be some conflicts but for most these are minor things. Will we have chicken or fish for dinner not life-threatening issues? This Manglik matching analyzer will help you match your horoscopes by analyzing the Janam Kundli of the couple. Overcome the ill effects of planet Mars today!