Twins symbolic meaning signifies that your family will be full of blessings for the good work you are doing towards your community and friends. In other words, sharing and understanding are part of your good qualities that brought the presence of twins into your family. More so, it is an indication that you will be at peace because you have such a great blessing in your life. Basically, it is now time to concentrate more on your family and make them happy.

Moreover, twins symbolism is a sign of a good omen. As it goes, every child is a blessing and having twins means that you will get endless blessings in your life. Perhaps, you need to promise yourself and your community greatness because of the sign. It is unique to have twins in your life. Let them become the light of your family because they are associated with goodness. Notably, take advantage of the sign you have got and make a great difference in your life and your family.

As is the case with all symbolism, there is no single item used to identify any given idea or theme. Rather, there is an infinite amount that spans across all cultures throughout time. The same applies to symbols for twins. Although they are somewhat of a rarity (or at least not the norm), they still have a variety of symbols that can be associated with them.

However, twins are a tricky concept when we view it from a spiritual perspective, as they are simultaneously separate and together. For accurate symbolic interpretation, we must consider both their duality and their unity equally. The symbolic explanations below do just that: exploring the closeness that seems inherent in twins while not neglecting the dualities that they express. Typically, twins are the ultimate indicators of connectivity, affinity, sharing, and understanding. However, it is important to remember that symbolic values and interpretations differ between groups. 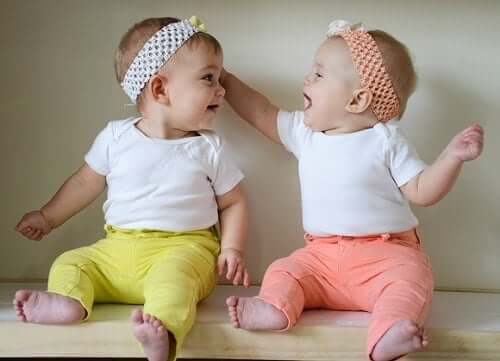 In astrology and the Zodiac, Gemini is the sign associated with twins. The emblem and picture paired with Gemini is even the Roman numeral “two”, for fitting and obvious reasons. In addition to twins concerning two people, the number two is also connected to the concept of duality, which occurs naturally in this sun sign. In this perspective, people with this sign are thought to experience duality of thought, which causes irritating contradictions in character and behavior. However, the symbol has also been implicated in the concept of adaptability. Geminis tend to have the ability to “twin” (or alter) their personalities in order to fit in no matter what the circumstances or social setting.

A highly spiritual and symbolic people, the Chinese also have a symbol connected to twins. However, it is only considered a symbol in Western cultures that cannot read Chinese, as the symbol is merely the characters that combine to mean the literal word, “twins”. Perhaps, the Chinese take twins as a sign to start something new. Therefore, they will be in a position to shift their work to something else in order to make great use of that good omen.

More literal than other twin symbols, a genogram is an efficient way to illustrate the physical bond between twins. There are two types of genogram symbols for twins: one for identical and one for fraternal.

An identical twin genogram is symbolized as a triangle with two circles on the base/foundational line of the shape. This is particularly fitting, as a circle is a symbol of unity and oneness – identical twins come from the same egg.

The fraternal genogram, on the other hand, differs slightly. While the identical twin symbol is a full triangle, the fraternal symbol lacks a foundational connecting line on the bottom. This was done specifically. While identical twins come from the same egg, fraternal twins result from two separate eggs, thus lacking a deep foundation. Additionally, the circles of identical twins are replaced with squares.

As a general group, the Native Americans were highly spiritual and symbolic people. Regarding twins, though, it was the Navajo that developed a particular symbol. Known simply as the Navajo twins, this symbol pictures diamond-shaped twins of differing colors and with different items portrayed inside the stomach area. In Navajo culture, these twins are to represent the Mother Earth and Sky Father twins (or brother twins) of legendary tales. These twins were powerful Native American symbols of creation and evolution. They symbolize the perfect balance that occurs throughout nature.

The Marasa is a popular Haitian symbol of twins. Specifically, it symbolizes the Sacred Twins, which beliefs to represent life and the abundance that comes with it. It ties with infants, as they are the true representatives of the divine light and purity that we are all born with. The Marasa is also commonly in use in ceremonies involving newborns with special needs.

More so, the twin symbol shows the definition of doing the right thing in life. Be grateful for having twins because you will be happy for the rest of your life. Specifically, their presence will bring happiness to your life.

Tao Symbol and Meaning of Twins

Lastly, a study of twin symbolism cannot leave out the Tao. More commonly referred to as Yin and Yang, the Tao is a perfect symbol for the nature of being a twin. One side is black, while the other is white, both with a complementary circle within their side. This denotes the symbiotic nature of twins. Although they share a duality and are connected, they are also unique and have separate identities.

Tao symbol brings the meaning of relationship. In other words, it brings a message of warning that you should no separate yourself as a family. Probably, they want you to work in togetherness ad sort out the issue that causes a difference in your life. Furthermore, it indicates that you need to forgive each other and do not allow indifference to ruin your relationship. Simply you still have great things that you can accomplish together instead of being apart.

Spiritually, twins show how you relate with each other in your community. Basically, you should understand that working together is a blessing. Twins come into your lives to show you the direction that you need to take in order to change your mentality towards each other. Firstly, twins are a sign of blessing in your family and their presence is to bring the message of transformation. Specifically, there are things that you need to change in your life that will eventually bring good things to your life.

Native American twin meaning indicates that you should appreciate everything that you get in life. Besides, do not ever challenge God for the things He does in your life. Actually, it is for your own gain to follow God’s laws in your life. Some signs like twin symbols are to direct you to a certain path that is full of blessings. Therefore, you should look at twins as a blessing from the spiritual realm to push you to another level in life.