Scorpio Woman And Aries Man – A Relationship Between Two Opposites

How compatible are Scorpio women and Aries men mentally, emotionally and sexually? Sometimes when a water sign and a fire sign combine, the fire is put out before they even start. But the Scorpio woman ignites the passion in the Aries man, and they can create a blaze the likes of which no one has seen. They just have to control it.

The female scorpion and the male ram meet easily, as they are both social zodiac signs that command attention wherever they go. Either one can make the first move, and once they do it immediately turns into a battle of wills.

The Scorpio woman is sharp and vibrant and the Aries man is fiery and bold, and they challenge each other to continue the witty banter for as long as possible.

The Aries male is brash and forthcoming, expressing his bravado at every turn. She, on the other hand, is more mysterious and always holds something back. The Aries man will see this as a dare to find out more about this alluring creature, and the Scorpio female will be up to the task.

While others might think that the Scorpio woman and Aries man are arguing or being combative, they are simply feeling the other person out to see how far they can go with their cunning ways. This is one couple who can’t wait to bring the relationship into the bedroom.

And for good reason too. The Aries man brings the heat and she adds the stamina, creating one of the most explosive and passionate matches in the zodiac. The Scorpio Aries pair like it rough and tumble between the sheets, pushing their lover to their sexual limits. As long as they are in sync with each other, it will be a most pleasurable experience. 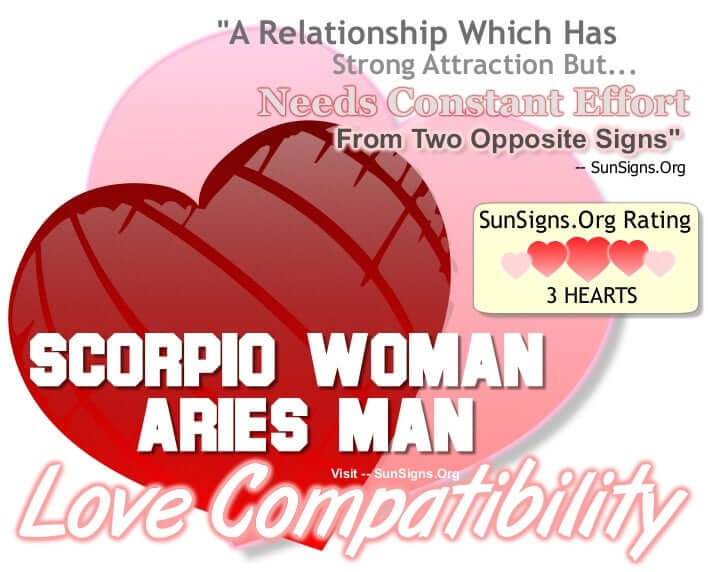 In love making if one of them insists on taking the lead, and both the Aries man and Scorpio woman will want to do so, that’s when the fire will turn destructive. He doesn’t relinquish control easily, if at all, and she laughs at his ego.

The Scorpio woman is perfectly capable of running the show, and he will scoff at her pretension.

This is the main problem in the love compatibility between these two sun signs. Aries men as the fiery ram are used to being in charge, and the Scorpio women as the watery scorpion flow over all she surveys.

The Aries man’s arrogance tries to dominate her dynamic force, and that’s when she brings out her stinger.

The Aries, in turn, responds with his quick temper. The Scorpio and Aries couple will have to find a way to tone down their arguments if they are to stay together. But if they can figure it out, the make-up sex will be phenomenal.

The Scorpio woman Aries man couple will also have to come to an agreement outside the bedroom to keep things practical, for both will take control over every aspect of the relationship. They will have to either take turns at the helm or split up the responsibilities so they each maintain authority in different areas.

The Scorpio and Aries match will have to work to figure out a balance between their forceful personalities, which will not be easy as neither one likes to compromise.

And with Aries flirtatious nature, he may anger his jealous partner to the point where she questions his loyalty. He, in turn, has a jealous streak of his own and she draws plenty of attention wherever she goes. It may not be intentional on her part, but it’s there.

Scorpio is a fixed water sign whereas Aries is a cardinal fire sign, the Scorpio woman Aries man compatibility gets a THREE Hearts rating. The Scorpio Aries pair will have to dial back their more brazen characteristics if they are to last, but if the attraction is strong enough they will both put in the effort to go the distance.